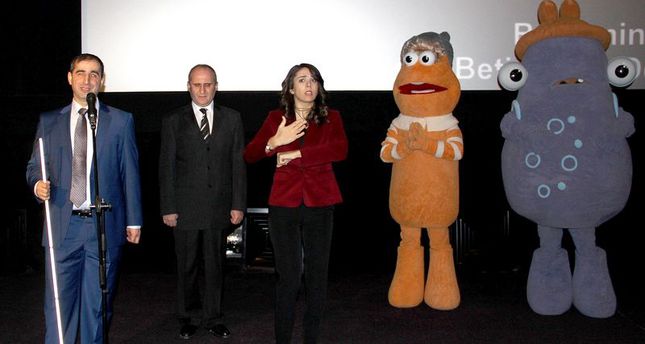 by AA Dec 28, 2014 12:00 am
Turkey's first puppet animation film "Rimolar ve Zimolar: Kasabada Barış" (Rimos and Zimos: Peace in Town) was screened with audio description, subtitles and Turkish sign language for deaf and visually-impaired children last week. With the support of Turkey's Family and Social Policies Ministry and the Association of Audio Description (SEDEBER), the special screening of Pati Film's production featured at Antares Shopping Mall in Ankara with the participation of ministerial deputy undersecretaries Gazi Alataş, Ömer Bozoğlu, Justice and Development Party (AK Party) deputy Tülay Selamoğlu and Janset, one of the film's voice-over artists. Prior to the screening, Kenal Önalan, SEDEBER president and as well as deputy undersecretary, extended his thanks to those who took part in this project. He said one day every film at theaters will be accessible to all. Önalan stated the more directors and producers support them, the more films can be screened for people with disabilities. The animation film was shown with audio description for visually-impaired children and with subtitles and sign language for the deaf. Focusing on friendship, more than 40 animation characters experience a humorous adventure on their town situated in a small desert. Viewers expressed their satisfaction at the end of the film and said they greatly enjoyed it.