Farewell to a bittersweet year 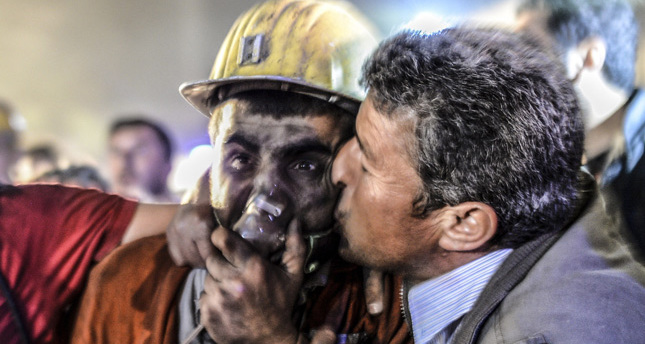 From the tragic mining accident in Manisa’s Soma district to Nuri Bilge Ceylan’s winning the Palme D’or, the past year brought both good and bad events for people in Turkey

We are leaving another year behind with its ups and downs, but before we turn our attention to 2015, let's have a look at the most striking events of 2014 ranging from the disasters that hit the country to the important visits by politicians to Turkey and from celebrity deaths to great talents.

Love: Celebrities made headlines with their love affairs in 2014. Although we had a hard time keeping the track of who was dating who and when they broke up, we want to recall some of those most talked about. Hadise was rumored to be dating Turkish singer Seda Sayan's son Oğulcan Engin, however her real boyfriend turned out to be Hakan Baş. While Özge Özpirinçci was seen holding hands with Burak Yamantürk in Bebek, the new couple Cem Yılmaz and Ayşe Hatun Önal made a splash. Also, Meryem Uzerli and Ozan Güven were caught while they were leaving Cem Yılmaz's apartment together at 1:00 a.m. The marriage plans of U.S. Consul General in Istanbul Charles F. Hunter and Turk Ramadan Çaysever hit the headlines in the last days of 2014.

Marriage: Many celebrities tied the knot in 2014. The marriage of actress Beren Saat to singer Kenan Doğulu was the most talked marriage of 2014. The two were married in the U.S. Singer Serdar Ortaç and Irish model Chloe McLaughlin, singer Kerem Cem and Seda Güven, singer Gülben Ergen and broadcaster Erhan Çelik along with actor Engin Altan Düzyatan and Neslişah Alkoçlar also exchanged vows.

Rumor: Rumors run rampant in Turkey. The so-called relationship between television personality Acun Ilıcalı and worldwide known top model Adriana Lima was a sensation on social media. While Atletico Madrid footballer Arda Turan reportedly continues his relationship with actress Serenay Sarıkaya, it is said that Turan's ex-girlfriend İdil Fırat is having an affair with Sarıkaya's ex-boyfriend Çağatay Ulusoy. Although there were rumors about a crack in the marriage between Tuğba Büyüküstün and her husband Onur Saylak, Saylak denied the allegations.

Fame: Singer İrem Derici, who made a name for herself on the show "O Ses Türkiye" (the Turkish version of "The Voice"), became the raising star of 2014 although she was eliminated from competition before the finals. The young artist's song "Kalbimin Tek Sahibine" (To the Only Owner of My Heart) was the most listened to and downloaded song of 2014 in Turkey. Kerem Bursin was another rising star of 2014. The new actor extended his fan base with his new TV series "Şeref Meselesi" (An Affair of Honor).

Popular culture: Turkish fashion designer Nur Yerlitaş's clothes and body gestures sparked hot debates on social media this year. Yerlitaş is a jury member for a fashion competition show on a private TV channel. Social media users made various comments about her. In addition, Çağan Irmak's drama "Unutursam Fısılda" (Whisper to Me if I forget) took viewers to the 1970s and was lauded in the media. Turkish singer Deniz Seki was sentenced to six years and three months in prison for drug trafficking.

Visit: Turkey was the favorite of foreign singers this year as well. Lady Gaga; Russell Crowe coming to promote his latest movie "The Water Diviner;" Bob Dylan; the successful new age musician Kitaro; Hugh Laurie, known for his role as Dr. House and Metallica all came to Turkey. The world of politics also welcomed many important guests this year. Especially the visit by Pope Francis, the leader of Catholic Church, remains memorable.

Murder: The former owners of Ören Bayan, a Turkish fiber company, Jack and Georgia Karako, were murdered in their house. The owner of Domermi Mehmet Sinan Kenanoğlu's dead body was found in his car with a bullet wound to the head

Disaster: The biggest disaster that hit Turkey in 2014 was the tragic mining accident in Manisa's Soma district on May 13 that killed 301 miners. Nation-wide mourning was held for three days. On Oct. 28, 18 miners were trapped underground after a flood at a coal mine in Karaman's Ermenek district. The search for miners took 38 days. Turkey woke up for another disaster on Sept. 6. An elevator dropped down the shaft and crashed to the ground at a construction site in Istanbul's Mecidiyeköy neighborhood killing 10 workers. On Nov. 3, some 25 migrants died after a boat carrying refugees sank in the Bosporus near Rumeli Feneri, a small village on Istanbul's northern coast. Six people were recovered but 13 refugees are still lost.

Challenge: "The ice bucket challenge" was this year's most discussed challenge activity. Many celebrities took part in the challenge to draw the attention to Amyotrophic lateral sclerosis (ALS), also known as Lou Gehrig's disease. Prime Minister Ahmet Davutoğlu's harsh criticism of Nationalist Movement Party (MHP) Chairman Devlet Bahçeli was the second hottest challenge in Turkey. Davutoğlu said, "I dare Mr. Bahçeli to pronounce these remarks – calling those who participated in the Dersim uprising terrorists and traitors – in Tunceli." Bahçeli went to Tunceli and gave a press statement in front of the governor's building, yet returned without visiting any officials.

Freedom: Islamic State of Iraq and al-Sham (ISIS) militants kidnapped 49 Turkish consular employees from the Turkish Consulate in Mosul, Iraq in June and they were released 100 days later on Sept. 20. A number of defendants prosecuted as part of the Ergenekon investigation and the Sledgehammer (Balyoz) coup trial, including former Chief of General Staff İlker Başbuğ, were released. The ban on headscarves for students in secondary and high schools was lifted.

Competition: Hot competition between Fenerbahçe and Galatasaray sports clubs was seen among the wives of famous players. Asena Erkin, the spouse of Fenerbahçe's player Caner Erkin and Yağmur Sarıoğlu, the spouse of Galatasaray's Sabri Sarıoğlu, showed off with their Lamborghinis in Istanbul's Nişantaşı neighborhood. Sarıoğlu's Lamborghini, which cost 890,000 euros, took the wind out of Erkin's car, which cost 600,000 euros.

Discussion: Discussion never ends for us. Dersim polemics, a recommendation to teach the Ottoman language by the National Education Council, the bonzai issue, which was taken into the scope of narcotics, and the new internal security reform package were among the most prominent discussions of this year.

Farewell: Many celebrities from art, business and the world of sport said goodbye to us this year. Selçuk Uluergüven, who is known for his role as Davut Usta in the TV series "Bizimkiler;" the scenarist Ayşe Sasa; Neslişah Abdülkadir Osmanoğlu, the granddaughter of Sultan Abdulhamid; Murat Göğebakan and Ciguli, who were famous singers; magician Ertuğrul Işınbark, who was nicknamed Mandrake; Süleyman Seba, who was the honorary president of Beşiktaş Club; Talat Sait Halman, who was the first minister of culture; Cem Garipoğlu; who murdered Münevver Karabulut are the famous persons passed away this year.

Talent: Tambi Asaad, 16-year-old Adyghe-origin teen, was the talent of last year who immigrated to Turkey due to the war in Syria and amazed music authorities with his one-year piano education. Tambi represented Turkey at a competition held in St. Petersburg, Russia. Erol Mintaş, a young director, won the best film award at the Sarajevo Film Festival with his first feature length film, "Song of My Mother."

Social Media: Rather than the 86th Academy Awards, which took place in March, the selfie taken by host Ellen DeGeneres became viral. DeGeneres uploaded the selfie to her Twitter account and it was retweeted by 3.4 million people, making selfies a world phenomenon. The results of the elections claimed the first place among the trendiest search terms on Google in 2014. The election result was followed by the World Cup and the Soma where a tragic mining accident took place.