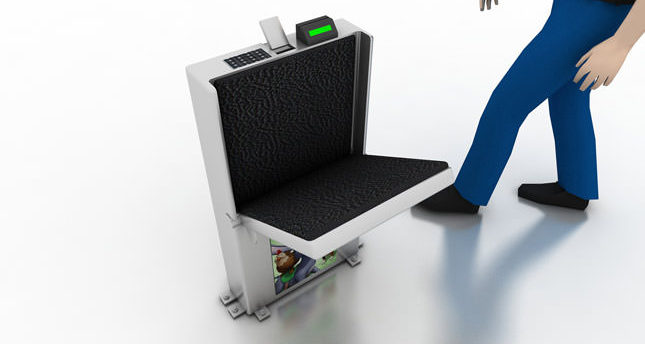 by AA Jan 17, 2015 12:00 am
Entrepreneur and project consultant, Abdullah Koçoğlu, has developed a passenger seat for pregnant women, the elderly and handicapped people to aid them in their commute on public transport. In his statement, Koçoğlu said that he named his project after passengers of first priority "Oturmatik," and has secured his innovation, which involves a magnetic card, by patent.

He said that he came up with project idea when he saw that pregnant women and handicapped people found it difficult to secure a place to sit on public transport because their reserved seats were occupied by other passengers. "Unfortunately, handicapped people, pregnant women and people over the age of 65 often cannot use the reserved seats on public transport. When this project is put into practice, people of first priority will not have to worry about whether others will give up their seats or not," he said. Koçoğlu offered insight into his project, saying, "People can open the seat I have invented by using special magnetic cards. In this way, their seats will be reserved for them and cannot be used by other people who are not pregnant, elderly or handicapped."

Koçoğlu and his team conducted research and development for two years for the project, and created all the technical designs by themselves. The seat – called "Oturmatik," a pun on the Turkish word to sit – also features an alarm system besides magnetic technology that prevents people from sitting on it once people of first priority get up.

A small part of this special seat will be covered by advertisements, and it will occupy a smaller space than regular public transportation seats. The project can also be used at bus stops, metro stations and other waiting points.

Koçoğlu, who aims to introduce his invention to the world market, said, "Prime Minister Ahmet Davutoğlu has carried out many social responsibility projects intended for women and children. This project will be a benefit to Turkey. I expect support from our Prime Minister for my project."