More than a day in Çanakkale 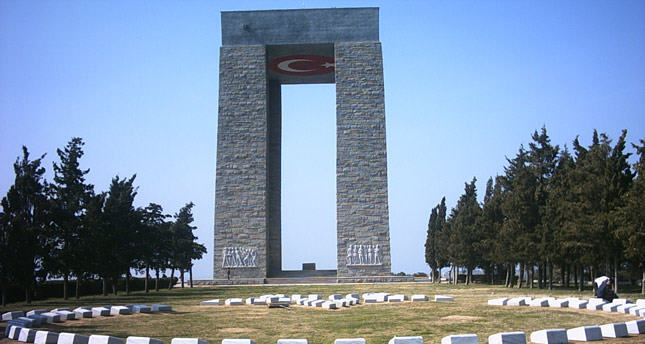 With the recent release of Russell Crowe’s directorial debut, ‘The Water Diviner,’ and the upcoming centennial of the Battle of Gallipoli, Çanakkale is drawing attention for both the province’s historical significance as well as its legendary setting

I happen to live in a village in Çanakkale, so I must admit that I am certainly partial to the region, which spans the Aegean to Mount Ida, combining the beauty of the coast and ancient towns such as Assos with the oxygen-laden mountain range that has been the site of many a mythological tale.

Like Istanbul, Çanakkale province straddles two continents. The city center is a historical student town set against the Dardanelles Straight, dividing Asia from Europe. The city faces Gallipoli and the impressive Kilitbahir Castle where the Dardanelles campaign determined Turkey's destiny, becoming the Republic that it is today. The region also has a history spanning 4,000 years with the ancient city of Troy, and as a result, it is a popular tourist destination only adding to its colorful and lively vibe due to its college town status housing the esteemed Onsekiz Mart University.

On March 18, Turkey will celebrate the 100th anniversary of the naval victory in the World War I Dardanelles campaign, considered to be the turning point in defining the nation. On April 25, Australians and New Zealanders will be landing in Çanakkale in throngs to commemorate ANZAC Day, the date of the landing of Australian and New Zealand troops fighting with the Allied Forces. With so much history and beauty, if you haven't been yet, it may be high time to discover this unique and picturesque city that holds such high cross-cultural significance.

Life in Çanakkale is centered on the five-story clock tower built in 1897 by an Italian consul and the long waterside promenade, dubbed the Kordon, which is divided by an impressive ferryboat dock with service to Kilitbahir, Eceabat and Gökçeada.

South of the clock tower is a maze of pedestrian streets that make up the old town center. Parallel to the seafront runs Yalı Street, which has a series of hotels, bookshops, live music venues, including Hayal Kahvesi's Çanakkale branch, and every local's favorite, the Yalı Hanı, a tea and beer garden set in a wisteria-draped courtyard of a late 19th-century caravanserai, which is now filled with a ceramics shop, exhibition space, printing press and bakery. The place is always packed and it is the perfect first stop to truly get a feel for what Çanakkale is all about.

Located one street to the east is the Çanakkale City Museum and Archive, a small city museum that has display panels depicting artifacts, drawing on oral histories of the province's residents since the Ottoman era. It also holds special story-telling events in an effort to revive this ancient tradition.

Çarşı Avenue is Çanakkale's answer to İstiklal Avenue and like its Istanbul version is lined with historical sites including the Yalı Mosque, the 17th century Yalı Hamamı and Aynalı Çarşı, an arcade reminiscent of the Grand Bazaar that was built in 1890. On the westernmost end are two specialty gourmet coffee shops opposite a series of just as delectable pastry shops making this the perfect spot to take a morning or afternoon break of people-watching and delicious noshes. It is also an opportune time to try Çanakkale's specialty peynir helvası (cheese halva), which is best bought from either of the two Babalık establishments nearby.

Çanakkale has a number of home cooking establishments that are inexpensive yet both classy and cute that always dish up the freshest of seasonal products on daily alternating menus and are a perfect lunch option to experience the city proper. Cevahir Ev Yemekleri is located in a historical stone building on Yalı Street, while Sardunya, set in an enclave one street east, is a quaint and colorful restaurant with an intimate garden. Heading slightly further east among the intertwining streets of the old city, Kara Üzüm doubles as both a restaurant and a hotel with an extensive rotating menu devised by its two academic owners, one being a gastronomy expert, and is an excellent respite from the more central tourist hotels.

The best restaurant in town serving up international classics is the chic Cafe du Port located in the glass-fronted Hotel Limani on the northern end of the Kordon. However, if fish is your passion, then Yalova is the most upscale and popular fish restaurant in town. If like Turks, tea is your pleasure, then Şakir'in Yeri is "the" place to be.

Join in with the locals and play a game of backgammon as you gaze out at Kilitbahir Castle and read the poem "Dur Yolcu" that reads, "Traveler halt! The soil you tread once witnessed the end of an era," etched into the mountaintop.

Just south, you can peruse the maritime museum and a replica of the Nusrat Minelayer, which played a heroic role in the sea campaign. The Dardanelle Straits Naval Command Museum is situated on a park bearing canons, guns and military artifacts and a small military museum containing relics and exhibits on the Battle of Gallipoli. Behind this maritime museum is Çimenlik Castle, built by order of Mehmet the Conqueror in 1452 and repaired in 1551 by Süleyman the Magnificent.

Starting from the ferry port, the northern side of the Kordon is an expansive waterside promenade lined with cafes and restaurants centered on one of Çanakkale's newest landmarks – the Trojan Horse used in the 2004 film "Troy" starring Brad Pitt. There is also a model of the ancient city and details of the epic battle as well an area designated for jewelry, craft and souvenir stalls nearby. Kavala is the best fish tavern on the northern end of the waterside promenade, while Hangover Cafe is the ultimate hip and happening hangout for locals and visitors alike and serves international favorites, such as fish and chips, steaks, Mexican and Italian fare from morning to night. Meanwhile, Lodos is Çanakkale's only electronic music nightclub with a thumping dance floor overlooking the strait and neighboring Eceabat.

Make sure to check out the inspiring Çanakkale Ceramics Museum, established in 2013 and housed in a former hamam built in 1905. Çanakkale is famed for its historical interest in ceramics, and this beautiful museum truly displays why that is. Starting Feb. 10, the museum will be hosting a very special exhibit entitled "Ancient Culture-Modern Friends," which will display pieces from Australian aborigines alongside a number of regional and Turkish artists.

Çanakkale also has an excellent library, endowed by a former archaeological director at Troy, the late Manfred Osman Korfmann, in 2004. This exquisite wood-outfitted library with high ceilings is housed in a former 19th century school and contains archaeological collections on Troy, Anatolia, the Balkans and greater Europe.

The Çanakkale Archaeological Museum, located 1.5 kilometers south of the otogar and on the route to Troy, has a courtyard laden with artifacts spanning thousands of year's B.C. – from Troy to a number of civilizations that inhabited the area afterwards.

Head south to the Yeni Kordon, the new waterside promenade, which is being stunningly landscaped to become the new focal point of the city. Get your feet in the sand as you walk along the shore or stroll along the newly designed walkways laden with sculptures and panels, hinting at how this now tranquil end of the city may soon become one of its most popular destinations.