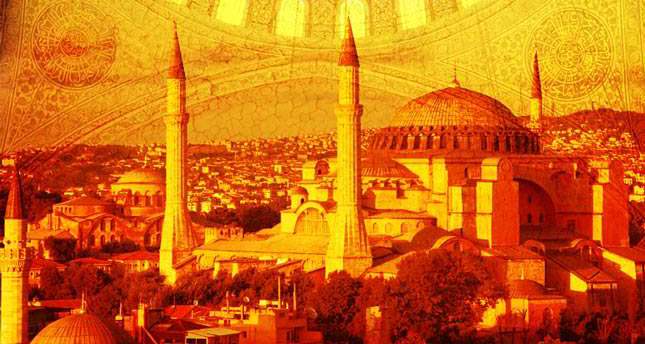 Turkey has long been a destination of intrigue and inspiration for writers, especially for those writing crime, mystery, spy and detective novels

Istanbul's position, straddling two continents where east meets west along with its history of being the capital of one of the most powerful empires in the world, has made the city and the country of Turkey the perfect setting for novels dabbling in intrigue, espionage, mysteries and thrillers. The following is a history of novels in the crime, espionage, murder mystery and thriller genres for which Turkey and Turkish characters play the muse.

The crime thriller genre set in Turkey started with a bang in the 1930's with two major historical works that take place on the Orient Express written by literary greats, Graham Greene and Agatha Christie. "Stamboul Train," a 1932 novel by Greene, one of the most well-regarded British novelists of the 20th century. It follows a series of characters who are passengers travelling from Ostend to Istanbul aboard the Orient Express. The 1934 Christie detective classic "Murder on the Orient Express" also focuses on private detective Hercule Poirot's misadventures aboard the historic train. Christie famously penned the novel during a stay at the Pera Palace Hotel in Istanbul.

Considered the inventor of the modern thriller genre, British novelist Eric Ambler's "Journey Into Fear," is a spy thriller published in 1940 featuring Colonel Haki, the head of Turkish Security, who also makes an appearance in later novels including "The Mask of Dimitrios." Set at the start of World War II, during a period where Turkey and Britain have signed a security pact, an ordinary Englishman gets caught up in a variety of espionage intrigues. "Journey Into Fear" was adapted for the silver screen in 1943 by Joseph Cottom, starring Orson Welles as Colonel Haki. "The Light of Day," which is about a conman who gets entangled in a heist with jewelry thieves in the Topkapi Museum, was published in 1962, and was adapted into the cult-classic film "Topkapi" directed by Jules Dassin two years later.

Ian Fleming cited Ambler as an influence in his "From Russia, With Love," the fifth novel in the James Bond series. Although it takes place in Istanbul and on the Orient Express, Fleming penned the 1957 book at his Goldeneye estate in Jamaica. Bond has to contend with an assassination attempt in this action spy novel that was made into one of the most popular film adaptations of the Bond series in 1963 starring Sean Connery.

In 1965, Istanbul was also the setting for the tenth novel in the long-running Nick Carter-Killmaster series of spy novels aptly title, "Istanbul." Penned by Manning Lee Stokes under the pseudonym Nick Carter, a U.S. secret agent is sent to assassinate four individuals involved in heroin distribution in Turkey, and is joined by Mija, a former heroin addict. He later parachutes into Urfa where he is captured and escapes, only to end up in a sanatorium.

"The Amazing Mrs. Pollifax," written by American writer Dorothy Gilman and published in 1970, tells the story of a middle-aged New Jersey suburbanite being called into service by the CIA and stationed in Istanbul. This is the second book in the comedic spy thriller series about Emily Pollifax, a suburban senior citizen and widow working for the American spy agency.

The 1980 novel "Pascali's Island" by Barry Unsworth, first released as "The Idol Hunter" in the U.S., was also made into a film in 1988 starring Ben Kingsley and Helen Mirren. Set in 1908 on an island outpost of the Ottoman Empire, Basil Pascali is a spy who reports to Istanbul about the locals.

Turkey has also received an honorable mention by some of the most widely-read authors in the late 20th century, namely in "Black Genesis," volume two of the biggest science fiction series ever written by L. Ron Hubbard, a pulp fiction writer of science fiction and mysteries who later founded Scientology. Moreover, Tom Clancy, one of the best-selling authors of espionage and military science novels, focuses his "Op-Center: Acts of War" on an investigation by a team from a regional operations center into the explosion at a Turkish dam and their being taken hostage by those responsible.

The Investigator Yashim historical crime series by English writer and historian Jason Goodwin takes us back to Constantinople in the mid-19th century as an Ottoman detective, who is both a eunuch and a foodie, solves crimes. "The Janissary Tree," published in 2006, is the first in the series, and won the Edgar Award for best mystery novel. "The Snake Stone," published in 2007 follows a French archaeologist in Istanbul while "The Bellini Card," published in 2006, is an escapade that takes place in Venice surrounding Bellini's portrait of Sultan Mehmed II. Additionally, "Evil Eye," published in 2011, brings the Ottoman sultan's harem to life, and the final Istanbul installation "The Baklava Club," published in 2014, follows Italian and Polish revolutionaries in Istanbul.

Novelist and social anthropologist, Jenny White, pens the Kamil Pasha series, which is set in 19th century Istanbul and the Ottoman Court. "The Sultan's Seal," "The Abyssinian Proof" and "The Winter Thief," published in 2006, 2008 and 2010, respectively, are historical murder mysteries, which follow Beyoğlu's Special Prosecution Magistrate Kamil Pasha's investigations into crimes involving foreigners and others individuals in the heart of the Ottoman Empire. "The Sultan's Seal" follows the murder of an English governess in the imperial harem. In "The Abyssinian Proof," Pasha investigates a hidden sect living in a cistern in Istanbul, while in "The Winter Thief," an explosion in an Ottoman bank leads Pasha to prevent the a massacre of a commune and villages in the eastern Turkish mountains.

Barbara Nadel is a prolific British crime novelist, having written 17 books alone in her series based on Inspector Ikmen, a modern day detective with the Istanbul Police. The first in the series is "Belshazzar's Daughter," published in 1998, and Nadel followed with a new book each year, with the most recent releases being "Body Count" in 2014 and "Land of the Blind," which will be released this August. She won the Silver Dagger in 2005 for "Deadly Web" and her other titles include "Arabesk," "Harem," "Dance with Death," "Pretty Dead Things," "Death by Design" and "A Noble Killing," as well as many others.

Mary Reed and Eric Mayer have penned a series of historical mystery novels set in Byzantium with the protagonist being John the Eunuch who serves as Lord Chamberlain to Emperor Justinian and solves mysteries in sixth-century Constantinople. Written between 1999 and 2014, the titles of the series are as follows: "One for Sorrow," "Two for Joy," "Three for a Letter," "Four for the Boy," "Five for Silver," "Six for Gold," "Seven for a Secret," "Eight for Eternity," "Nine for the Devil" and "Ten for Dying."

The 2004 dark comic thriller "Savarona" penned under the pseudonym J. Patrick Hart, is a fictional tale set in Istanbul that details the intricacies of diplomatic life in the U.S. State Department, and is regarded by many to be the greatest foreign service novel. On the opposite spectrum is the 2011 science fiction thriller "Deep State" by American writer Walter Jon Williams. This is the second book in the Dagmar Shaw series, featuring a female protagonist who implements an augmented reality game in Turkey to promote a James Bond movie during political turmoil.

"Istanbul Puzzle," a Dan Brown-esque mystery thriller by Irish crime novel writer Laurence O'Bryan was published in 2012. This first installment of the three-part thriller mystery series takes place in Sultanahmet and includes unraveling leads by way of mosaics to catch a killer.

"Istanbul Passage" is a spy novel and the latest release by Joseph Kanon, an American writer and New York Times bestselling author for "The Good German," which was made into a film starring George Clooney. Released in 2012, "Istanbul Passage" takes place in 1945 and tells the story of an American businessman being drawn into a world of espionage in Istanbul.

Last, but certainly not least, is "Inferno," written by renowned American thriller and fiction writer Dan Brown and published in 2013. "Inferno" is the fourth book in the bestselling author's Robert Langdon series, which started with "Angels & Demons" published in 2000 and continued with "The Da Vinci Code" in 2003 and "The Lost Symbol" in 2009. "Inferno" begins in Italy with Harvard Professor of Religious Iconology and Symbology, Robert Langdon, investigating a mystery surrounding "Dante's Inferno." The adventure takes him to Sultanahmet's Hagia Sophia in search of a tomb and concludes with a dramatic finale that unravels at the Basilica Cistern.