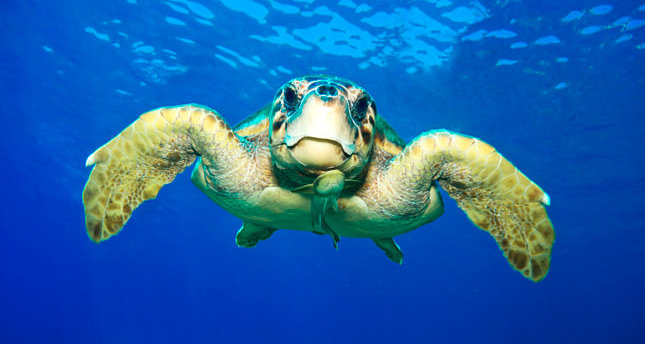 by Daily Sabah Jan 27, 2015 12:00 am
The breeding ground of loggerhead sea turtles, also known as caretta carettas, on Muğla's İztuzu Beach has been declared as a protected area. The governor of the Muğla province, Amir Çiçek, said, "The breeding area of sea turtles in İztuzu Beach has been taken under the government's protection. During the season, sunbeds will not be allowed in this area. We are very sensitive about maintaining the natural habitats and reproduction cycles of these turtles."

After examining the wooden buffets on the beach as well as the area that sea turtles lay their eggs, Çiçek said there are no illegal housing structures on the beach. Çiçek gave a statement to reporters following his examination and assured concerned individuals and groups that the natural beauties and ecological system of İztuzu Beach will be protected and preserved.

Stressing that the beach's management will not be assigned to any private companies, Çiçek said, "The Dalyan and İztuzu Beaches are two of the most beautiful places in Turkey."

He underscored that the contributions made by these places to regional tourism are incredibly important. The beach, which hosts every shade of blue and green, is also the home of the loggerhead sea turtles.

The governor emphasized that tourist activities are being conducted without destroying natural habitats of these sea turtles. Çiçek also claimed that foreign and Turkish tourists come to Dalyan for both its nature and to rest. In the beginning of the January, activist held a sit-in near İztuzu beach against the privatization of the famed beach. The protest ended after a court ordered the suspension of the privatization process.