Artists spruce up the streets of Malaga 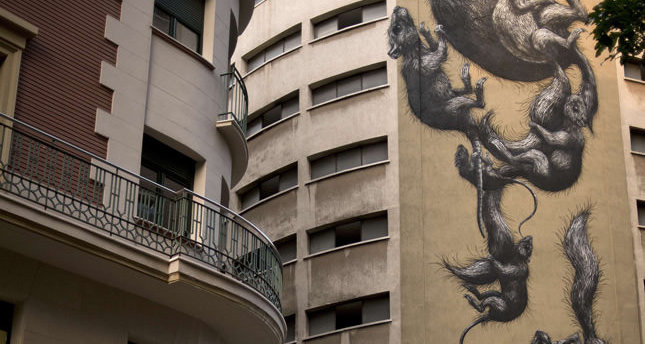 by Jan 31, 2015 12:00 am
When the Spanish city of Malaga wanted to clean up its sleazy portside district, it called in the painters - big international names in the street art movement.

In streets formerly roamed by sex workers and drug dealers, the faded 19th-century buildings now bear weird and wonderful murals by street artists from Britain, the United States and beyond.

Far from covert acts of tagging, the works were ordered by local authorities tapping in to a once-renegade art movement that has now become respectable.

Along with newly pedestrianised streets, spruced-up parks and new streetlights, they have revived the Heredia district near the Guadalmedina river. It has now been dubbed "Soho," after arty districts in New York and London.

"The idea originally came from the locals and a few businesses," said Fernando Frances, director of the city's Contemporary Art Centre and one of the organisers.

"We thought street art would contribute to giving the cultural image that we wanted."

Among the street stars recruited was U.S. artist Shepard Fairey - known for a stylised portrait of Barack Obama, titled "Hope," and the iconic "Obey" face logo.

Traditionally a secretive genre ranging from graffiti to stickers, stencils and cunning visual illusions, street art boomed in the 1980s and has since gone mainstream. Some of Fairey's works, for example, have been bought by museums.

But Frances said it was not always easy to track down the artists, many of whom still work anonymously and without authorisation.

He managed to get hold of about 50 artists, however, and gave them free rein to brighten up the district's public walls and shopfronts.

Among them was Dadi Dreucol, a 26-year-old local Spanish artist, who painted bizarre murals of black masked figures.

Dreucol has been painting since he was 12 but says the scene has taken off lately thanks to the internet.

The street art has also improved life for some of Malaga's other 568,000 inhabitants.

Antonio Mancera, 63, smiles proudly at the scaly chameleon design on the wall of his house by the Belgian artist Roa. He offers to show visitors around the district's various murals.

"There was a desire to revive this neighbourhood," he said.

Locals hoped the murals would lure tourists who generally shun the Malaga waterfront in favour of beaches further along the coast.

Now the street art has landed, some are trickling by.

"It is often their children who find out there is a street art scene" and take their parents to see it, said one local artist, Javier Calleja.

Authorities have held concerts and exhibitions, encouraging shops and art galleries to set up in the district.

Pedro Marin Cots, top town-planning official in city hall, said 34 businesses have been opened or renovated in the area since the project launched in July 2013.

Among them is a bicycle shop set up by Javier Marin, a 27-year-old with a hipster beard and horn-rimmed glasses.

Eight months after opening, however, he said shoppers are not yet flocking to the district. He is hoping for an increase in business come summer.

The city has issued a call for a second round of street art contributors.

"There's a lot still to do before this will be a Soho like in the big cities," Marin said.