Bosnia and Herzegovina: ‘Sarajevo roses’ recall the horrors of war 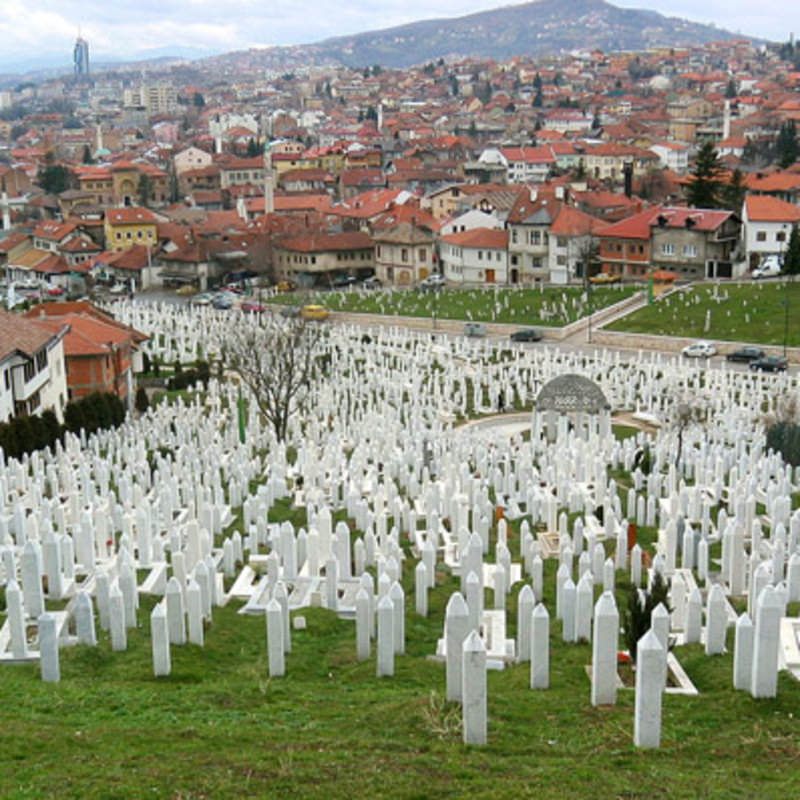 by Anadolu Agency Feb 09, 2015 12:00 am
On March 20, 1993, 11-year-old Irma Grabovica was killed by Serbian shelling while playing in a street of the Bosnian capital. A crater marked the place where the shell struck. After the war ended in 1995, these craters were painted red in honor of the blood that was spilled in these places and called "Sarajevo Roses."

Fikret Grabovica, Irma's father, is now the president of the Association of Parents of Children Murdered in Besieged Sarajevo. He is adamant about reassuring the parents of murdered children that it is "very important" that these Sarajevo Roses be preserved.

During the 1,425 day-siege of Sarajevo by the Serbian army, an average of 329 shells struck the city each day, killing 11,541 civilians, out of which 1,601 were children. According to the Union of Civilian War Victims in the Sarajevo Canton, at least 50,000 people were injured and the siege left many Sarajevo Roses.

Preserving the memories of the siege

The siege of Sarajevo by the Serbian army was the longest one in recorded human history. It left many scars on Sarajevans and on their city, but not all of the Sarajevo Roses have been preserved. In the 20 years since the war, Sarajevo has been rebuilt; however, the reconstruction filled in and covered up many of the Sarajevo Roses. Thus, families of the victims of the siege are mounting an effort to preserve the Sarajevo Roses so that the truth can continue to be preserved and protected from being forgotten.

Nearly 200 citizens gathered in Sarajevo on Thursday to mark the 21st anniversary of the massacre that happened at the Markale street market on Feb. 5, 1994, when shells fired from surrounding hills killed 68 civilians and injured 144.

At the remembrance gathering, people laid flowers on the remaining Sarajevo Rose. The one at the Markale market is one of few that have been preserved.

Melita Dokic, whose 17-year old daughter, Maja, was killed on April 9, 1995, while returning home from basketball practice, met the Anadolu Agency team in the city center to show where there a Sarajevo Rose was once located, but has since been covered by asphalt during the renovation of intersection.

"I feel sorrow that the traces of the killing of Sarajevo children are covered and very quickly forgotten," Dokic said, adding that it would mean a lot to her if that 'rose' remained uncovered because every time she passes it, she looks at the place where her daughter died.

U.S. photographer and film director Roger M. Richards is making a film called "Sarajevo Roses." "These roses are a symbol of the city, its struggle to survive the siege and afterward when all was destroyed," Richards said. "In my film, they are a metaphor for the city, and the petals of these shell impacts mark the pavement like scars on the heart; a terrible beauty. The red is not only for the color of the flower but of the innocent blood spilled on Sarajevo's streets. The real roses are the people of Sarajevo, who continue to bloom. Roses still grow even in the middle of destruction," he added.

Will the roses survive?

Whether the 'roses' on the streets of Sarajevo will be preserved depends on the city's cultural agencies. The Cantonal Institute for the Protection of the Cultural and Natural Heritage put the Sarajevo Roses on the list of authentic monuments from the period of the siege. The Department of Veterans Affairs of the Sarajevo Canton has also developed criteria for preserving them. "The criteria for preserving the remaining roses is that at least three people must have been killed in the explosion," said Osman Smajlovic, Assistant Minister for Veterans Protection.

He added that there were originally nearly 100 roses painted in the city, some of which were destroyed because of "negligence." The ministry is currently working on the restoration of the 12 remaining roses. "The restoration of the 12 remaining roses in the city center should be completed by the end of 2015. They will be nominated to UNESCO's World Heritage List as well," Smajlovic said. Bosnia and Herzegovina was part of Yugoslavia until March 1992, when a majority voted for independence in a referendum. In May of the same year, Serbs besieged the valley-situated city of Sarajevo, stationing tanks, mortars and snipers on all the surrounding hills. The siege officially ended with the Dayton agreement between the warring parties, which was signed in Dayton, Ohio in December 1995.