A life-long dream of sailing on a gulet from Turkey 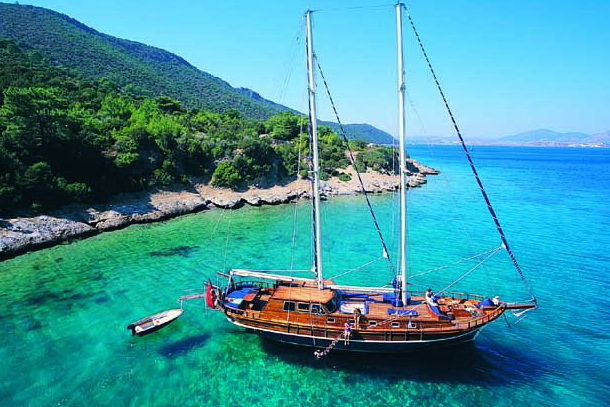 Although more people are traveling to Mediterranean countries due to large cruises and expanded opportunities provided by agencies, my father’s dream, as well as my own, was much more humble and thrilling: To set off from Italy and head to Turkey passing through the Greek Aegean on a wooden sailboat

It was my father's life-long dream to return to Turkey to own a wooden sailboat, similar to the type used for "Blue Cruises" along Turkey's Turquoise Coast. And so, 15 years ago when he came across his ideal Tirhandil-gulet medley built by Bodrum's famous boat maker Erol Ağan, my father at the age of 78 became a captain and the owner of his dream boat. With the sailing stylings of a tirhandil and the comfort of a gulet, my father decked out his 15-meter-long boat with three double cabins, an indoor kitchen and living room with all the fittings, and named it Froggy, which for him was a representation of this new transformation.

In Istanbul, the boat stayed at the beautiful Kalamis marina and it was outfitted with a full kitchen, lovely upholstered seating with the walls lined with books. We would spend days on it at the marina and occasionally took it out along the Bosphorus or to the Prince's Islands. I remember hopping on it once from Ortaköy and once from Çengelköy and spending a weekend aboard the boat in Heybeliada.

Then my father planned his big trip. A carefully detailed plan of stops all the way to Italy. The crew was assembled: a Turkish-Australian captain, a diver whose day job is being a gold jewelry maker in the Grand Bazaar; my father's assistant and right-hand woman, a beautiful blond bubbly Turkish lady, who has become closer than family, and her husband; and me, who flew in to Italy from Los Angeles to join the team in Sorrento. Watching this familiar boat approach the dock in Italy was a surreal experience that I will never forget. Suddenly I entered a full-on sailing life dictated by the wind.

We sailed to a variety of places on the Amalfi Coast, such as Amalfi, Procida and the isle of Capri, and set up at the local ports in the center of these glitzy, popular and picturesque towns. We would set up our table and cook a lovely meal of local produce, then hit the town at night for a stroll and gelato. Some nights would end with a spontaneous dance party on board to anything from tango to Turkish classics.

We also stopped in Positano, the beautiful town featured in the film "Il Positano." In this town, I broke away from the group to take photos only to end up meeting up with everyone on the shore as we all had simultaneously come across a live theatrical performance being held on a platform in the sea. The streets in these towns were each like winding pieces of art and everywhere you turned there was a photo opportunity. There were outside cafes lining the small streets and some would have to carry their tables inside occasionally to allow a car to pass, which thankfully were few and far between. Italy also had wonderful pan pizza, which we would buy in bulk, offering a delicious break on board.

From Lecce we crossed over to Corfu in a sudden storm measuring near 50 knots and a 10 on the Beaufort scale. Most everyone retreated to their bunks, but the captain and I were tied to the ship on deck as he waded through the waves and I enjoyed the thrill of being thrown up and down off the boat, which felt like the rollercoaster of fate. When dawn broke, the sea calmed and we rolled into Corfu.

After the harrowing night, the captain took to cruising slowly near the shore, as we watched people going swimming and enjoying life. Then suddenly, a huge crunching sound was heard as the boat crashed into and then settled into some rocks. Our diver went down to check it out and the Greek coast guard showed up and towed us into their port where they kept us for 48 hours to make sure it was safe. Suddenly, we were captives on board in a port in Corfu.

Once the mandatory time passed, we decided to relax in a popular cove for sailors in Corfu. There we made friends with other sailors from Holland and had nights of guitar-playing and dinner parties. That's where I discovered the joy of the "joker" boat, the small and light motor boat used to transport people from boat to boat or shore.

Our next big stop was to be the Peloponnese peninsula and the Corinth channel, which cuts through the mainland of Greece below Athens in a manmade channel that passes 6.4 kilometers in length and is only 21 meters wide. Carved out in 1893 by prisoners of war, you can feel the immense blood, sweat and tears that must have been shed to create this narrow passage of light turquoise water.

We spent a few days stranded on the Cyclade island duo of Kea and Kythnos as a storm brewed. Both stops were on remote sides of the island, and we spent days planning to leave, yet stuck due to the wind. With hours to traverse to any town, we remained without bread, fruit and veggies for much longer than anyone liked. We depended on the fish caught by the fishermen on our boat in what was our own mini version of "Survivor." Once, one of our crewmembers caught a meter-long tuna fish, which we enjoyed day after day with, when possible, our staple salad, bread and rice.

Mykonos then came at the perfect time as a little slice of paradise, with cafes galore and lots of people-watching over crepes and iced coffees as our boat lay just off shore. From buzzing Mykonos and its picture-perfect maze of white-domed houses adorned with blue shutters, we headed to the much more mellow, quaint and authentic Ikaria, which happened to be my personal favorite. It felt like a secret find with very few foreigners leading travelers to bond and band together on this once-Ottoman island that feels as if time has stood still. Meanwhile, it also hosts numerous festivals, which we happened to come across. With these jolly events and its overall peaceful vibe, it makes sense this island is one of the world's five "Blue Zones," where people live to the oldest age.

From there we went to the Isle of Lesbos and had a final few glorious days on the beach, only for me to say an epic goodbye to the boat on a highway in Mytilene city. I jumped off with my bags and guitar in tow as cars rushed beside me. My father, aboard his beloved ship, waved goodbye in the distance.

My father went on nearly a dozen more trips to Greece and the Turkish Riviera in succession with family and friends. Unfortunately, we lost my father at the start of this winter, and just a few months later in a storm in Istanbul, we also lost his beloved boat. When I heard that the boat had sunk all I could think was that his beloved boat, and the way he had decorated it and touched every inch of it, will now be altered forever. Somehow, fate or "kader,"' the word for destiny in Turkish, caused us to also lose this believed piece of my father as we know it. It is, in a sense, the end of an era and the beginning of a new one for this boat, which has since been recovered and transformed to begin a new life, much like the symbolic "Froggy" it was named after.