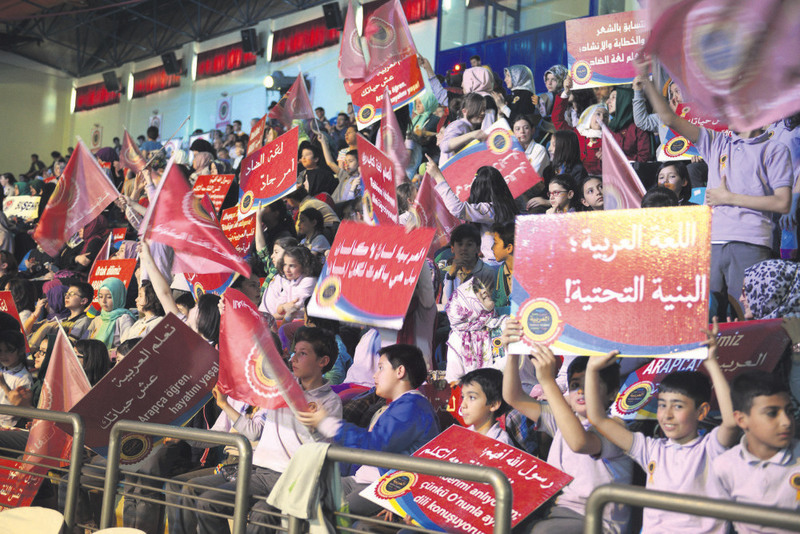 The sixth International Arabic Competition will be held on April 2 with categories in knowledge, poetry reading, impersonation of stories and Arabic calligraphy. Organizers expect record-breaking submissions and attendance this year, as the competition received 21,473 applications from students from 53 countries

Co-organized by the Ministry of National Education's General Directorate of Religious Education and Academic Language and Linguistics Research Foundation, the sixth International Arabic Competition received 21,473 applications from students from 53 countries. A total of 21,473 students from 800 İmam Hatip high schools, which incorporate theological lessons into the curriculum, 905 İmam Hatip middle schools and three international İmam Hatip high schools will compete in the sixth edition of the competition. Students will participate in the competition, which broke attendance records, and compete in Knowledge in Arabic, Poetry Reading in Arabic and Impersonation of Stories in Arabic categories on April 2, 2015, in the 81 provinces of Turkey. Students who will compete in the Calligraphy in Arabic category, which is exclusive for high school students, can submit their work to the competition's coordination center until the deadline of May 8.

The process of the competition will be different for İmam Hatip middle schools from İmam Hatip high schools for the first time this year. The students who will participate in the categories, which will take place under the motto "Shoot your video and send it," will shoot videos for the Poetry Reading in Arabic, Impersonation of Stories in Arabic and Children's Songs in Arabic categories. Those students wishing to participate should submit their short videos to can submit their work to the competition's coordination center until the deadline of March 27.

As part of the protocol signed between the Presidency of Religious Affairs and the Ministry of National Education, 1,109 students from 72 countries are currently receiving education in three different international İmam Hatip schools in Turkey. A total of 53 students from these schools, which are known as International İmam Hatip High Schools, have applied to the competition. The foreign students will first compete in the qualifying rounds of their own countries, followed by the continental qualifying rounds. Finally, they will face the Turkish champions in the finals that will take place in Kayseri on May 21 along with the finalists from the middle school competitions.

The provincial and country-based qualifications of the competition will take place simultaneously throughout Turkey on April 4, whereas the regional and continental qualifications will be held on May 2 in Ankara, Giresun, Rize, Mardin, Malatya, Adana, Burdur, Manisa, Kırklareli, Konya and Istanbul.

The qualifications for the categories will take place online, and the champion middle school students of the regions will compete face-to-face on May 23 in Kayseri.

The Kayseri İmam Hatip High School Alumni Association (KİM-DER), which is one of the long established nongovernmental organizations in Turkey, will host the Turkish finals and the award ceremony of the competition. The Turkish finals, which will take place from May 21 to May 23, will come to an end with a splendid award ceremony that will be broadcasted by many local, national and international TV channels on May 23.
Last Update: Mar 12, 2015 1:18 am
RELATED TOPICS