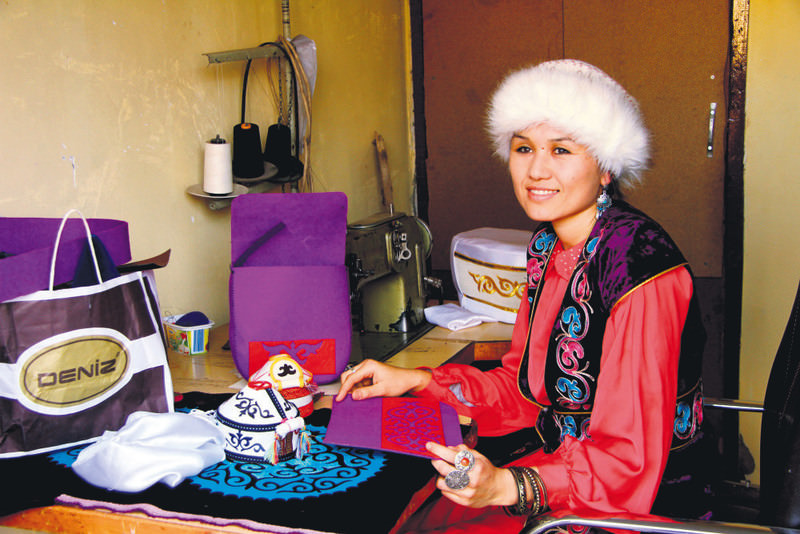 by Anadolu Agency Mar 17, 2015 12:00 am
Kyrgyz individuals who migrated to Van's Erciş district from Afghanistan's Pamir Mountains in the 1980s due to deteriorating environmental conditions and epidemic disease have gained notoriety for designing epic TV drama accessories.

Residing for the past 30 years in Ulupamir village, which is 30 kilometers from Erciş, Kyrgyz women keep their traditions alive while designing authentic accessories for the popular TV series "Diriliş Ertuğrul" (Resurrection: Ertuğrul) depicting the early days of the Ottoman Empire. The women contribute to their family's income with these accessories, which reflect their lifestyle and traditions. The villagers previously made accessories for other TV series and films with Ottoman and Seljuk-era themes.

One of the Kyrgyz women, Aysel Aytaç, said they designed and produced the traditional wall and carpet decorations adorning the nomad tents seen on "Diriliş Ertuğrul." "We make these decorations at home with our own efforts. They reflect our own culture. So far, we designed many clothes and accessories to introduce our world to other people," she said. Aytaç stated that some directors have come to their village to shoot films. "We try to preserve our culture as well as we can and support our families," she stressed, adding they can do better work if they receive financial support, as they want to enhance their small-scale production capacity and turn it into something bigger.
Last Update: Mar 18, 2015 1:51 am
RELATED TOPICS