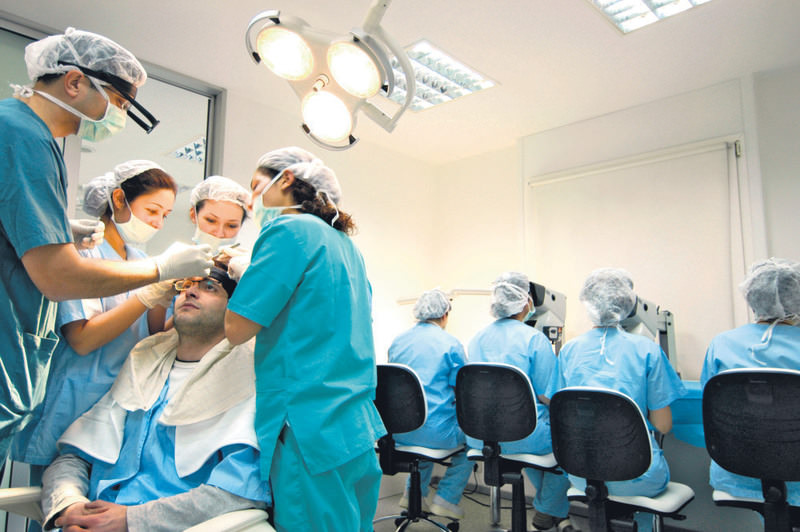 When it comes to health and beauty, people will stop at nothing to get the best care at the most affordable price. Turkey, which is among the top 10 healthcare destinations globally, offers a quality service with favorable prices for hair transplant surgeries

Beauty tips from a fashion guru in an article recently published in a top international style magazine have helped highlight one of Turkey's hidden booming industries: Hair transplants.

"Know a man who needs to up his facial hair game? Send him to Turkey," the guru wrote in Allure in March.

More than 15,000 people now flock to Turkey from all over the world for hair transplants – an industry that is now worth close to $250 million annually and part of a global hair transplant industry worth about $1 billion, according to the International Society of Hair Restoration Surgery.

In Istanbul, there are now about 250 clinics that compete to cover bald pates or to give mustaches to men who seek a certain masculine image.

Why do they choose Turkey?

"The quality is high and the cost is relatively low," according to Muharrem Cetinoglu from Konhair SAC Ekimi, a chain of hair transplant centers based in Istanbul.

Feyman Duygu Oktar, the founder of the Ankara Hair Center, said: "Today, hair transplants have become more popular than in previous years, thanks to higher quality that provides a natural appearance with transparent roots. Turkey has achieved a high level of technological advancement in the field."

Moreover, compared to many other countries, a treatment costs about TL 5,000 ($1,929) – a relatively low price. The cost is a fraction of what one would pay in the U.S. or the U.K., where the cost runs as high as $25,000, and even cheaper than in Greece, which is one of Turkey's top competitors in the sector. Oktar added that most customers come from Europe and the Middle East.

"Turkey's location – only a 2-3 hour flight from major cities in Europe and the Middle East – and also its evolved holiday industry are advantages that are bringing in more patients. Another advantage is that Turkey does not apply a visa to individuals coming from more than 70 countries, and people from more than 110 countries can reach the country on a nonstop ticket. Recently, more demand is coming from Saudi Arabia due to cultural appropriateness," Oktar said.

Turkish television shows have also popularized a specific masculine image that has become popular in the Arab Gulf states.

Many foreign hair transplant patients contact their doctors in Turkey via WhatsApp or other social media.

Ahmed, who did not want to give his surname, and traveled from Saudi Arabia for a treatment, said that he had contacted a doctor in Turkey by email and sent his picture for an initial assessment. "I preferred Turkey for medical treatments due to lower-cost, high quality medical care after personal referrals from my friend who had dental treatments in Turkey. I am having a hair transplant, and I am enjoying Istanbul's historical sites and shopping as well," Ahmed said.

The quality of Turkish healthcare has improved markedly over the past decade, including that of hair transplants, according to the European Society of Hair Restoration. The society cites state-of-the-art medical centers which use modern equipment. Moreover, many of the doctors in Turkey who perform the transplants have been practicing for years and have considerable experience.

The result has been an overall improvement in the quality of care, and Turkey is already among the top 10 healthcare destinations globally, according to Deloitte's 2014 Global Life Sciences Outlook.

There are more than 1,600 thermal springs in the country for those who seek alternative methods of treatment a well.
RELATED TOPICS