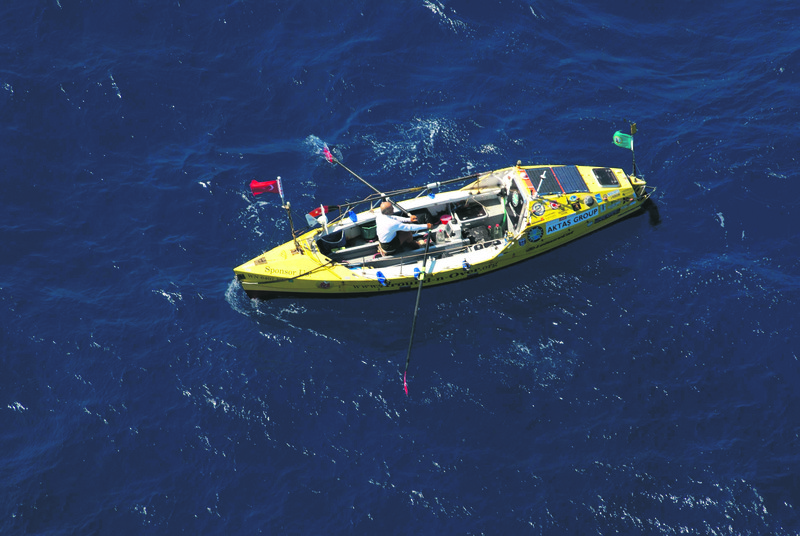 Adventurer, outdoor sportsman and AKUT Search and Rescue Association member Erden Eruç, who broke a Guinness World Record as the first rower to conquer three different oceans, is planning to travel to the Gallipoli Peninsula from New York in his special rowboat

To mark the 101st year of the Battle of Gallipoli next year, Turkish sportsman Erden Eruç will first cross the Atlantic Ocean and then continue his journey in the Mediterranean Sea before he arrives at the Gallipoli Peninsula. His journey will take around 10 months. With his motto "Kaslagit" (Travel with your muscle), Eruç set off from the U.S. in 2007 and completed the first solo human-powered circumnavigation of three oceans in five years. Speaking to an Anadolu Agency correspondent, Eruç said he would set off in his special rowboat to commemorate those who died during the Battle of Gallipoli. He calls his newest challenge "Barışa Yolculuk" (A Journey to Peace). On May 19, he will set off from New York with an Australian friend. Eruç is planning to cross the ocean in 85 days and will first arrive in Morocco. Later, they will travel along the Mediterranean Sea. He said he is planning to reach Gallipoli at the time of next year's commemorations.

During their journey, possible weather conditions in the Mediterranean Sea will challenge them, Eruç continued. As an inland sea, the main handicaps will be the lack of prevailing winds and strong currents. The two travelers will have packaged food kept in waterproof sections of the deck and will drink ocean water they purify onboard. In case of any drinking water problems, they will consume ballast water normally used to balance the deck. To provide energy, solar panels will be installed on the boat. "We need to consider weather conditions in the Mediterranean Sea to decide our next destination - an island or a harbor. We will continue our journey with patience and caution since it is a delicate task," Eruç said, adding he predicts a long journey ahead. "Early in the New Year, we will probably arrive in Gökçeada. Then, we will share what we have encountered," he said.

Eruç stressed that he is currently busy gaining sponsorship for the journey and with the necessary preparations. The ambitious adventurer initially decided to realize his new target in 2014 to mark the centenary of the Battle of Gallipoli, yet had to cancel it due to back pain. When the Atlantic hurricane season began, he delayed his project to the following year. "I had to postpone my travel due to my illness. At first, I was thinking of crossing the ocean by myself, but then realized it would be more meaningful if my friends from the countries that participated in the war went with me," Eruç added. If any of them accompanies him, then not only the Turkish flag, but also another country's flag will appear on the boat. "It will be a beautiful message of peace," he said. Eruç further highlighted the importance of 2015 for Turkey, as both good and bad news might come in the following months. "This is because we want to present a story with a proper peace message," he said. Having studied machine engineering at Boğaziçi University, Eruç settled in the U.S. On July 27, 2007, he set off from Bodega Bay in California to Australia. He traveled across the Pacific Ocean and arrived in Papua New Guinea in May 2008. In January 2010, he reached Australia after having spent 312 days on the Pacific. He then crossed the Indian Ocean and arrived in the Atlantic. It took five months for him to cross the Atlantic, and then he headed to Venezuela. He returned to Bodega Bay on June 21, 2012. His adventure took five years and 11 days in total.
Last Update: Mar 26, 2015 2:08 am
RELATED TOPICS