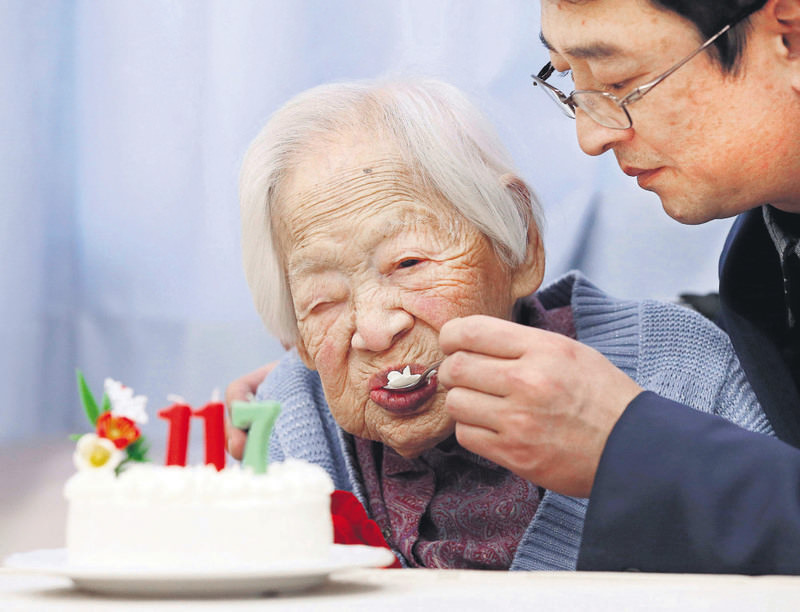 by Associated Press
Apr 02, 2015 12:00 am
The world's oldest person, a Japanese woman, died Wednesday, a few weeks after celebrating her 117th birthday.

Misao Okawa died of heart failure and stopped breathing as relatives and nursing home workers stood by her side and praised her for achieving a long, healthy life, said Tomohiro Okada, an official at her Osaka nursing home.

"She went so peacefully, as if she had just fallen asleep," Okada said. "We miss her a lot."

A 116-year-old American woman, Gertrude Weaver of Arkansas, is now the world's oldest person, according to Los Angeles-based Gerontology Research Group, which keeps records of supercentenarians. She was born July 4, 1898.

Okawa, born in Osaka on March 5, 1898, was recognized as the world's oldest person by Guinness World Records in 2013. She lost her appetite about 10 days ago. Until then, she had been eating well, enjoying her daily cup of coffee and her favorite dishes, including ramen, Okada said.

Okawa, the daughter of a kimono maker, said at her recent birthday celebration that her life seemed rather short. Asked for the secret of her longevity, she responded nonchalantly, "ı wonder about that too."

She married her husband, Yukio, in 1919, and they had two daughters and a son. She was survived by four grandchildren and six great-grandchildren. Her husband died in 1931.

Japan's oldest person is now a 115-year-old Tokyo woman, according to the Ministry of Health, Labor and Welfare. The name of the woman, who was born March 15, 1900, was not released at the request of her family, the ministry said.