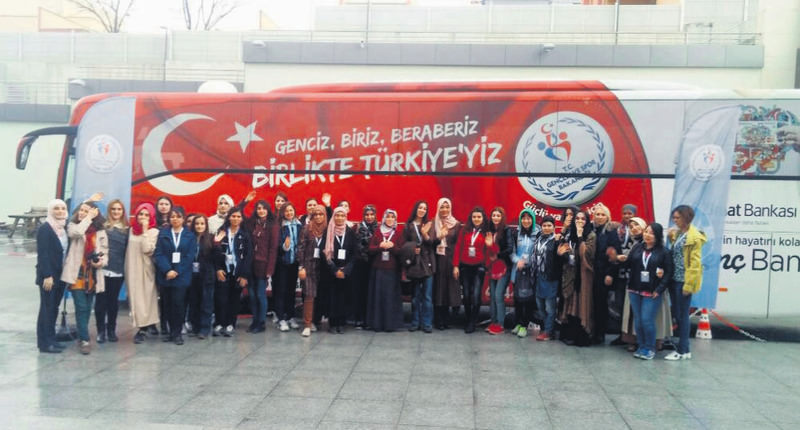 The ‘Damla Project,' which was initiated by students who come to Turkey from all over the world for college, was launched by the Ministry of Youth and Sports to provide training to young people on various subjects in Turkey's disadvantaged regions

The number of international students who participate in the Damla (drop in English) Project, which was launched by the Ministry of Youth And Sports General Directorate of Project and Coordination in order to contribute to the Peace Process initiated by President Recep Tayyip Erdoğan, has reached 700. Within the scope of the project, students who come to Turkey from all over the world for a university education visit different provinces of Turkey and meet local children and young people.

Ministry advisor Metin Ayvazoğlu offered insights about the project and said they provide training to young people in the project on various subjects including the importance of volunteering, philanthropy, goodness, empathy, sacrifice, Sufism, sustainability, environment and youth education.

Stating that they take Muslim university students who come from different countries to various provinces of Turkey, Ayvazoğlu noted the students get a chance to know the local cultures and the community. He said that their aim is to take students to disadvantaged regions and help them touch the hearts of the people living in those regions. He also expressed his desire to help young people gain social status. Noting they instill a clean environment consciousness in young people apart from teaching them Turkish traditions, Ayvazoğlu stated: "This is a continuous project that is carried out with the funding of the Ministry of Youth and Sports. Our ministry always provides funding to these kids of voluntary activities and projects." He underlined that they received positive feedback about the project. "We began with a small drop, and now we have reached 700 students through the Damla Project," Ayvazoğlu said, adding that the project is growing in waves and turning into an ocean. He explained that they would be the most peaceful and happiest people on earth if they touched the hearts of even a few people. "We want to be one of the people who contribute to the peace and brotherhood process initiated by President Erdoğan. If we achieve this goal, we will be truly happy. God willing, we are on the right track," he went on.

Furthermore, Ayvazoğlu said that they will travel to Sinop in the upcoming month as a part of the project, and they will pay visits to several places to carry out activities.

Syrian Visam Neccari, who studies at Kocaeli University, stated he is very happy to be a part of the Damla Project. He stressed that they come together to contribute to the concepts of unity, brotherhood, sharing and especially to support the peace process and said they travel throughout Turkey.

Albanian Esmeliya Zalli, who studies at Istanbul University, said she witnessed many good things during the project in which she participated for the first time, adding that they have faith in the project.Nimasatta Tamara, who is a master's student at Ankara University from the Republic of Gambia, noted that they have a chance to get to know the traditions of the regions they visit and they share good emotions with the local people.
Last Update: Apr 06, 2015 2:19 am
RELATED TOPICS