Protest against Robbie Williams due to his planned Israel concert 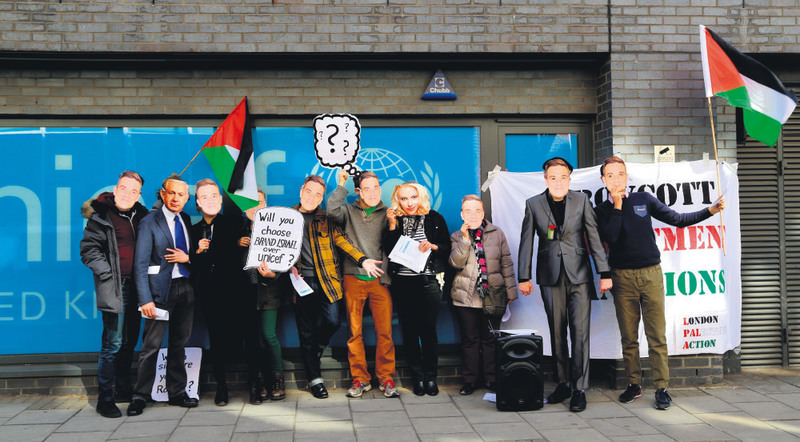 by Anadolu Agency Apr 08, 2015 12:00 am
World-renowned British pop star Robbie Williams, who is the goodwill ambassador for the United Nations Children's Fund (UNICEF), was protested in London due to his concert scheduled in Israel's capital Tel Aviv next month.

Participants in the demonstration led by London Palestine Action outside the London bureau of UNICEF demanded that Williams cancel his Tel Aviv concert and advised UNICEF to convince Williams to change his concert schedule. Demonstrators shouted slogans such as "Giving a concert in Israel means supporting apartheid," wore Robbie Williams' masks and sang his songs but with modified lyrics. Scottish engineer Rob Langlands, one of the demonstrators, told an Anadolu Agency correspondent that Williams supports UNICEF's "Children in Danger" campaign, which aims to protect children from violence, diseases, hunger and war and said: "Either Williams should cancel his Israel concert or UNICEF should dismiss him as a goodwill ambassador. We want UNICEF to know that the situation is controversial." He stressed that Williams scheduled his Israel concert a week after he was chosen as ambassador and claimed that this will damage the reputation of UNICEF. "Williams should be convinced to cancel his concert," he added.

Additionally, more than 5,000 people signed a petition that was organized in response to the concert. The Palestinian Campaign for the Academic and Cultural Boycott of Israel (PACBI), based in Palestine, also supported the protest against Williams' Israel concert. "Palestinians are calling upon you to cancel your May 2015 performance in Tel Aviv. Do not let Israel use your name to cover its illegal actions against international law as well as human rights. If you cannot support our struggle for freedom, justice and equality, at least do not undermine it." The 41-year-old pop singer who has been touring the world with his show titled "Robbie Williams: Let Me Entertain You" is planning to perform in Tel Aviv on May 2.
Last Update: Apr 08, 2015 9:34 pm
RELATED TOPICS