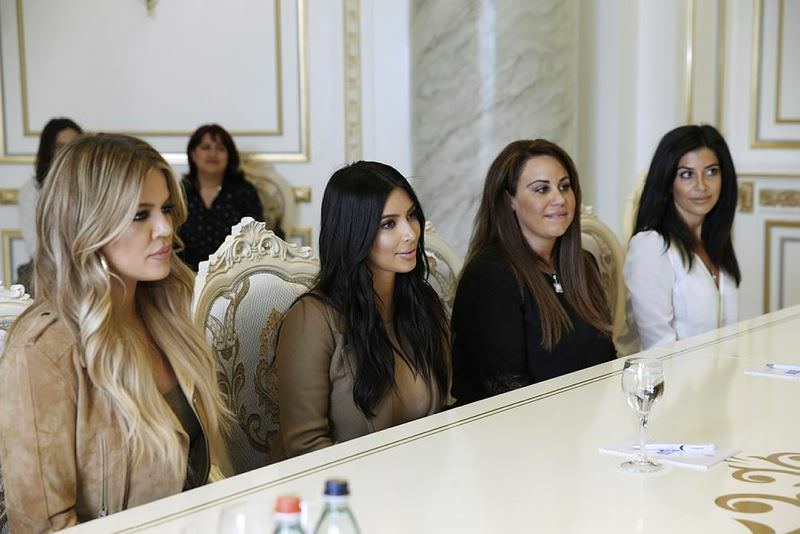 by Daily Sabah with AFP Apr 09, 2015 12:00 am
US reality TV star Kim Kardashian on Thursday met Armenia's prime minister in a first visit to celebrate her family's roots and attend the commemorations organized for the 100th anniversary of the so-called Armenian Genocide.

Kardashian -- along with her rapper husband Kanye West, young child and sister -- has booked up two floors in one of the fanciest hotels in the heart of the capital Yerevan.

Surrounded by bodyguards and dressed head-to-toe in beige, Kardashian and her entourage were greeted by a huge crowd of fans as they took a tour of downtown Yerevan on Thursday.

Kardashian is reportedly in the country to make a documentary on the so-called Armenian genocide, ahead of events later this month to mark the centenary of the 1915 events.

"The Kardashians apologised for not speaking Armenian but said they are learning their native language," a government statement said.

"They pledged to continue the struggle for international recognition and condemnation of the Armenian genocide," the statement said.

President Serzh Sarkisian is currently in Italy on a visit that will also see him meet Pope Francis.

Beyond snapping selfies with her fans, Kardashian has refused to talk with the press but instead took to social media to express her delight at being in Armenia.

"Armenia we are here!!!!! We are so grateful to be here & start this journey of a lifetime! Thank you to everyone who greeted us! I can't wait to explore our country and have some yummy food!" Kardashian wrote on Instagram.

"My husband and daughter came to Armenia as well to see my heritage and learn about my ancestors! My cousins came along too! So excited I can't sleep."

Kardashian's Armenian ancestors on her father's side emigrated to the United States from Turkey.

The 1915 events took place during World War I when a group of Armenians living in the Ottoman Empire supported a Russian invasion and revolted against the empire, resulting in their relocation to eastern Anatolia. Turkey refuses to use the term "genocide" to refer to the incident, as many Turks also lost their lives due to attacks carried out by Armenians in Anatolia. Meanwhile, Armenia and the Armenian diaspora continue to campaign for the incidents to be recognized as genocide.

In 2014, Turkish President Erdoğan issued a letter expressing condolences for the 1915 events, in an unprecedented move. Turkish officials consistently urge for the establishment of a joint historical commission to investigate the events and call on Armenia to open their archives as Turkey has done.