Turkey: The serenity of Istanbul's historic groves in springtime 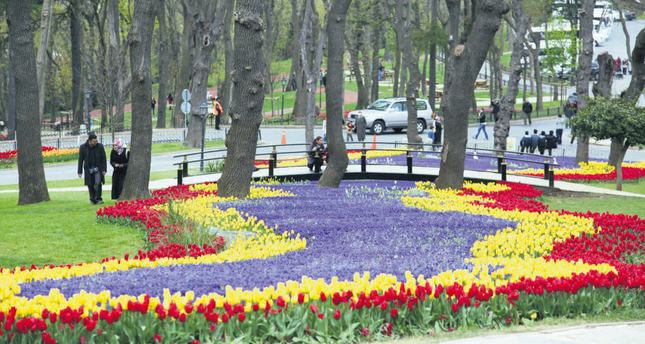 With spring is knocking on the door, it is time to enjoy the natural awakening of Istanbul’s groves, where history meets foliage and serenity

Leaving cold winter days behind, Istanbul is welcoming the best season to find a nice place to enjoy the blossoming flowers and reawakening nature. Spring in Istanbul begins around April and lasts until the beginning of June. With temperatures around 23 degrees Celsius, it is a time that allows one to discover the beauty of the city amid a suitable atmosphere for outdoor dining and sightseeing along the Bosporus.

Istanbul has many groves and parks scattered around the city on both sides of the Bosporus. As spring arrives in the city, these groves become shining hideaways of the city once again. Mostly overlooking the Bosporus and Sea of Marmara, Istanbul's groves date backs to the Ottoman and even Byzantine periods. In times past, the groves in the city mostly belonged to Ottoman pashas and statesmen and they lived there in some part of the year. Even today, many of the groves have still called by their old owner' names.

The oldest trees in Istanbul, monumental trees and those trees that are not suitable to Turkey's climate can be seen Istanbul's groves, including many trees from Africa and America.

There are many ways to discover Istanbul, but one of the best is to walk on foot in places where history meets nature. It is unfortunate that green places around this big city are not sufficient to make all Istanbulites happy at the same time. Just like other examples around the world, there are many skyscrapers, traffic jams and rush hour that drive most of us crazy during the daytime in Istanbul, but these groves typically serve as a place of calm with their verdant atmosphere, Bosporus views and historical features, now experiencing a new awakening, new hope and new joys come with the coming of spring.

Emirgan Grove in Sarıyer district: Overlooking the Bosporus, Emirgan Grove is one of the most popular groves and parks in Istanbul due to its perfect location between the districts of İstinye and Emirgan. Nestled amid high walls, Emirgan Grove covers an area of nearly 325,000 square meters. The grove was built by Sultan Murad IV in the 17th century and is still one of the most visited green areas in Istanbul. There are three pavilions in the grove –white, yellow and pink pavilions. Having the legacy of old-fashioned Ottoman style houses, these pavilions are today used as cafes and restaurants giving five star services at affordable prices. These pavilions offer a la carte service on weekdays, breakfast in the morning and open buffets in the afternoon on weekends. When you enter the grove, you will be amazed by the greenery and the arts that come out of the box trees in the grove. Nearly on every corner of the uphill and downhill roads of the grove, an amazing Bosporus view awaits you. There is also one little artificial pond in the grove where you can feed ducks and swans. You are lucky if you have a chance to visit the grove in April because every April since 2006 the grove is home to a huge tulip festival to which many visitors come to see the magnificence of newly blossomed tulips. A little reminder: This year's Istanbul Tulip Festival will begin on April 11 in Emirgan Grove, if you want to see amazing tulip art you should be there this weekend. For a serene weekend walk and an affordable but high-class dinner in an atmosphere that hides verdant tones and an amazing Bosporus view, Emirgan Grove should be on your list.

Yıldız Grove in Beşiktaş district: Located in the busy Istanbul district of Beşiktaş, Yıldız Grove, also known as Yıldız Park, is one of the most historical public parks in the province. Situated between Çırağan and Yıldız Palaces, Yıldız grove was built during the Ottoman era and hosted many Ottoman sultans. Sultan Süleyman the Magnificent used the grove as a hunting area. During the time of Sultan Abdülhamid II, the grove was a home for palace dwellers as the park was also reserved for them. In the early 19th century, the area opened to construction and took its name from the first pavilion, which was Yıldız Kasrı. High walls around the grove, a small house and artificial lakes were also built then. Today, the grove is filled with many trees from around the world, there since the Ottoman era. What makes this grove such a magnificent place to spend time is its panoramic Bosporus view that you can enjoy while sipping coffee. In the outer section of the grove, which is open to the public, there are some pavilions called Malta Pavilion, Çadır Pavilion and Şale Pavilion. You can also find picnic areas around the grove where you can experience an unforgettable weekend in the park amid magnolias, bay laurels, Judas trees, horse-chestnuts, oaks, pines and ashes. For a nice weekend getaway close to the city center, and for a panoramic Bosporus view, Yıldız Grove awaits you with all its beauty.

Yıldız Grove is situated in between Beşiktaş and Ortaköy. You can get there on foot on a nice walking trail from Beşiktaş or you can take buses that go through Ortaköy from Beşiktaş to reach the grove.

Fethi Paşa Grove in Üsküdar: Located between Üsküdar and Beylerbeyi districts on the Asian side, Fethi Paşa Grove is one of the most popular groves in Istanbul and especially preferred by families for a nice walk on weekends. The grove has a wide range of vegetation and functions like an oxygen tank for surrounding districts. Named after the Tophane Marshall Fethi Paşa who served as ambassador and state minister during the reigns of Sultan Abdülhamid I and Sultan Mahmud I, the grove was later distributed among Fethi Paşa's heirs after his death at the end of the 1800s. In the following years, especially between 1960 and 1980, the grove was left to its own fate and turned into an overgrown area. There are two pavilions in the grove that have been turned into a restaurant and café and were opened to the public in 2003. Among the facilities in the grove, there are children's playgrounds, a sports field, basketball courts and two man-made ponds, so it is a perfect spot for you to get away from the rush of daily life and find some peace in an oxygen-rich atmosphere. The serenity and peaceful roads heading uphill will make you relaxed and happy during your tour in Fethi Paşa Grove. If you live on the Asian shore and are looking for a peaceful place for a walk during the week or weekend, Fethi Paşa Grove is one of the best places to go around the city.

How to go there: To get to Fethi Paşa Grove you can take the 15 Beykoz-Üsküdar and 15K Kirazlıtepe-Üsküdar buses. You can also reach the grove by car via the Beylerbeyi and Kuzguncuk route.

Mihrabad Grove in Kanlıca: With a picturesque Bosporus view, Mihrabad Grove on the Asian shore enchants many visitors with its beauties. On 25 hectares, the grove is covered with diverse gardens, cypresses, umbrella pines, bay laurels and Judas trees. You can go for a nice walk in the grove or sit in one of the cafes overlooking the Bosporus for either an open buffet breakfast or dinner. Apart from restaurants in the grove, there is also one event area that is mostly used for wedding ceremonies. According to rumors?, the grove takes its name from the Mihrabah Mansion that later burned down in a janissary rebellion in the Ottoman era. The grove is one of the few places in Istanbul where you can see the view of the Fatih Sultan Mehmet Bridge over the Bosporus. Many renowned Turkish writers and poets have mentioned the grove in their pieces since it has been known as where lovers find peace hand in hand.

To reach Mihrabat Grove with public transport, you need to take a metrobus from Zincirlikuyu if you are located on the European side and get off at the first stop after passing the bridge. Then you need to take the 15 Beykoz-Üsküdar bus and hop off in Kanlıca. You can also take ferries from Beşiktaş to Üsküdar to reach the grove.
Last Update: Apr 11, 2015 6:36 pm
RELATED TOPICS