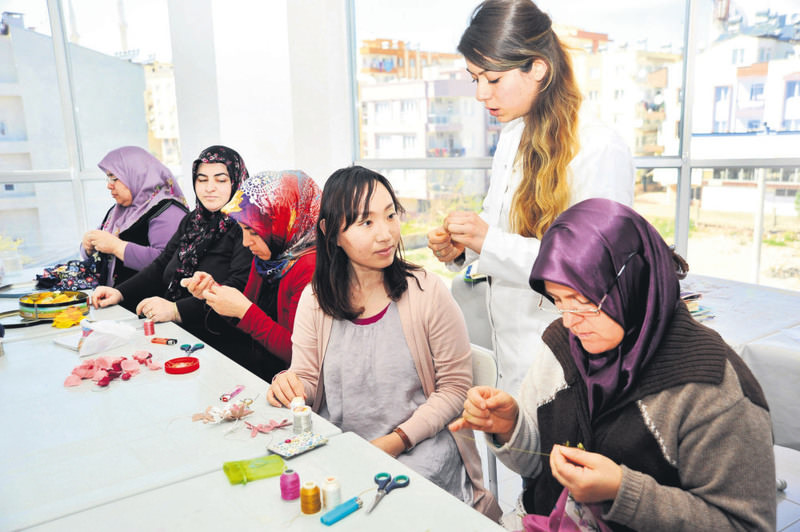 by Anadolu Agency Apr 12, 2015 12:00 am
Having seen needlepoint lace works on a TV show, Savako Nishimura, 39, decided to learn it so she left her home and traveled 9,000 kilometers to attend the Antalya Art and Profession Training Courses (ASMEK) which is organized by the Antalya Metropolitan Municipality. Graduated from the Department of Music at Osaka Ongaku University, Nishimura tried to learn needlepoint lace in Japan on her own at first; however, failing to make any progress, she packed her bags and came to Turkey. The Japanese woman, who arrived in Antalya one and a half months ago, started to attend needlepoint lace classes organized by ASMEK, an affiliation of the Antalya Metropolitan Municipality, three days a week.

Stressing that she is pleased with the attention of other trainees in the course, the devoted Japanese told how women in the course helped her. As she does not speak English, the instructor and other trainees assist Nishimura by showing her what they are doing.

Nalan Şenli, the coordinator of ASMEK informed that they admitted Nishimura as a guest student to their center which offers handicrafts and vocational courses to housewives and those who want to learn a profession. She also said that 15,975 people have enrolled in 122 different courses for 2014-2015 term and added 11,374 of the participants are women. Şenli reminded that their courses are open to all foreigners who want to learn more about Turkish culture and cuisine.
Last Update: Apr 12, 2015 11:38 pm
RELATED TOPICS