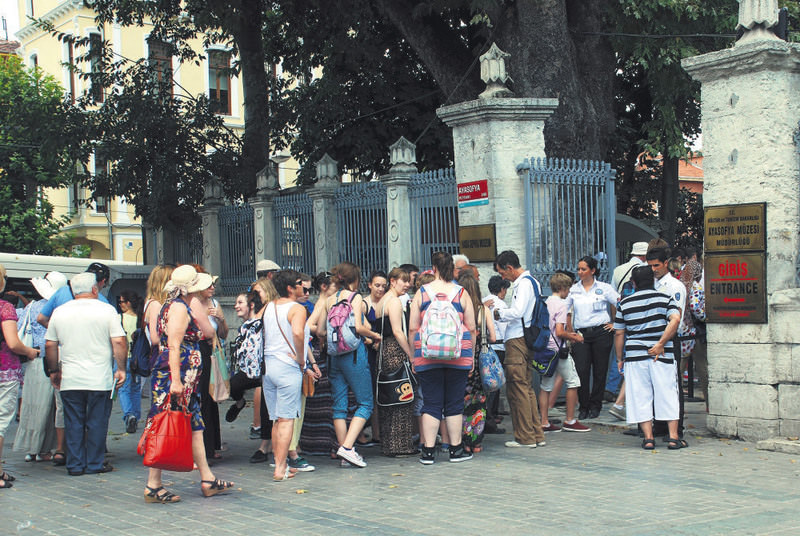 Prepared by the Association of Turkish Travel Agencies, a new project will grant a convenience to the hearing- and visually-impaired who visit prominent museums in Turkey. Guides will learn sign language and descriptions will be updated to include Braille

Embossed brochures for visually impaired visitors are also available. According to Ulusoy, the project will be developed in the coming days and will be available at other museums like Topkapi Palace and Hagia Sophia in Istanbul. Each museum hosts over 5 million visitors annually.

Saying that TÜRSAB undertook the arrangement, display and restoration work on the archaeology museums, which are home to over a million artifacts, Ulusoy said the museums' doors are open for visitors. Furthermore, he offered insight into the restoration of the museum buildings and indicated that they worked hard to shed light on artifacts that have been stored in storage rooms for 100 years or more. "Thanks to our tourism movement, we host 50 million visitors every year and gain $50 billion; hence, it is not wrong to say museums are our capital and tourism is our commerce. What we are doing here is to bring our capital together with commerce," he explained, adding, "We have some video devices that help hearing impaired people (visiting the archaeology museums)."

Ulusoy and Turkish pop music mega star Ajda Pekkan convened in the Istanbul Archaeology Museums near Topkapi Palace in the historic Sultanahmet district to raise awareness for deaf people before the start of Tourism Week, which runs April 15-April 22. Ulusoy and Pekkan took a tour of the museums and got information from officials.

Speaking at the conference, Pekkan drew attention to the importance of museums in terms of science, culture and arts and lent her backing to the project.

"Mr. Ulusoy and I have taken it upon ourselves to integrate disabled people into social life. We are lucky to have outstanding museums in Turkey such as the Istanbul Archaeology Museums, Hagia Sophia Museum and Dolmabahçe Palace," she said. "To protect our history, we demand equal and comfortable access to these important places. I am very happy to cooperate with TURSAB to help hearing-impaired people visit our museums comfortably."

Following the press conference, Ulusoy presented the book "Dünyanın En Büyük Müzesi: Türkiye" (The Biggest Museum in the World: Turkey) to Pekkan as a gift.

Answering a question about the long lines in front of the museums, Ulusoy said that plans were being made to create an "appointment system" to cut the massive waiting times at key Istanbul attractions. "We are working on determining the visiting hours for this system. When a cruise ship comes, 5,000 people line up in front of the museum at the same time," he added. He said the number of visitors has gone up 5 million from 300,000, and they are in touch with the Ministry of Culture and Tourism for the necessary arrangements.

"If people are waiting over two hours in line for museums in London or the Eiffel Tower, there should be no problem waiting in line for Hagia Sophia, Topkapı Palace or Sultanahmet," he suggested. Each of the museums Ulusoy mentioned receives 5 million visitors every year, and 3 million visitors are expected for the archaeology museums.

When asked about the impact of the crisis with Russia on tourism, Ulusoy claimed that it would not affect tourism in Turkey. Stating that they have taken precautions to avoid any setbacks in the tourism sector, Ulusoy said that they will make it easy to get a visa at border checkpoints.

Tourism is one of the key sectors for the Turkish economy.

According to a World Tourism Organization 2014 report, Turkey was ranked the sixth most popular world destination after France, United States, Spain, China and Italy, attracting 5.5 percent more tourists in 2014 compared to 2013, despite political and geopolitical crises in the region.

The number of tourists visiting Turkey reached 42 million in 2014. "We expect to host around 43 million people in our country this year," Ulusoy added.
Last Update: Apr 15, 2015 11:27 pm
RELATED TOPICS