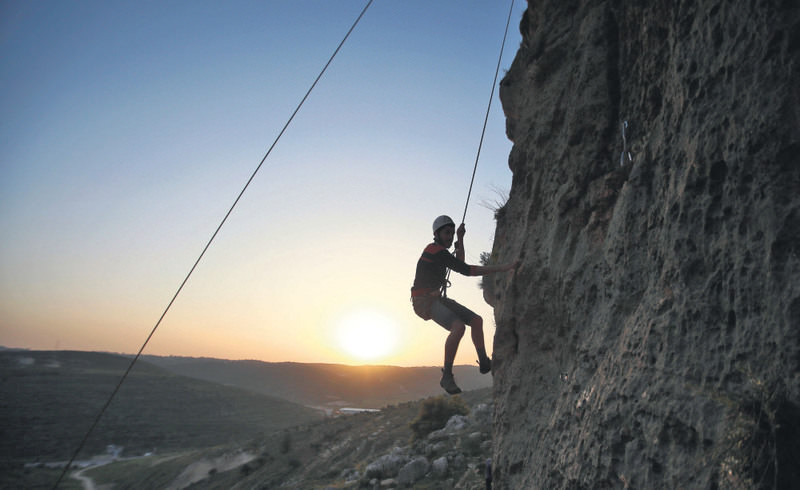 Gripping tightly with her hands, her feet searching for a foothold, Salwa Khashan edges along a sheer rock face in the Israeli-occupied West Bank, urged on by friends below. She and her fellow climbers are the first group of Palestinians to win climbing certificates after graduating from a three-day Wadi Climbing course just north of Ramallah.

"It taught me a lot," said Khashan, who lives in Arab-dominated East Jerusalem, which Israel began occupying along with the rest of the West Bank in 1967.

"I learned to push myself and to use my mental strength to find the way up, to deal with the physical pain and push myself to the top," she said.

For the 23-year-old and her small group of fellow climbers it has been a voyage of discovery thanks to two young Americans with a love of climbing and a determination to share their passion with others.

Will Harris of Chicago and Tim Bruns from Connecticut, both 23, travelled to the West Bank with one objective in mind.

"Tim and I came to Palestine to develop a climbing community here," Harris said. "We were exploring a lot of Palestine and saw a huge potential for outdoor climbing."

They started off by doing a few test climbs with friends in the Ramallah area. After that, they organized several short excursions for Palestinians and foreigners living in the area, and then decided to launch the Wadi Climbing project. They now work in two outdoor climbing areas near Ramallah and are developing the first Palestinian indoor climbing and fitness facility.

For Nadine Abu-Rmeileh, another 23-year-old from East Jerusalem, it was her first time climbing and it affected her deeply. "I can't describe the feeling you have when you reach the top," she said. "You feel a great sense of achievement. At first when I saw the cliff, I thought it would be impossible to climb it. But then when I raised my foot and I started to climb, I found myself at the top."

Under scudding clouds on an unseasonably cold and damp Friday morning, the group of 12 gathered at the foot of the rock face and separated into three teams according to ability: Beginners, intermediates and those taking a test. Beginners are given specialist shoes after which they learn the basics of knot tying, repelling and belaying, a key safety technique by which a person on the ground is linked to the climber by rope and can support his or her weight in the event of a fall.

But the bolting – installing the metal pins into rock faces so that ropes can be attached to them – is only done by the trainers. "It's really scary," admitted 22-year-old Omar Abu-Arra who comes from Jenin, a village in the northern West Bank. "But you force yourself to do something you have never done before, especially in this country."

Finding locations to climb in the West Bank brings its own challenges. "Bolting in Palestine is kind of tough because you are confined to certain areas," Bruns said. "So, we wanted to develop new areas that are accessible for Palestinians because you have to take into account kind of access and where [the Jewish] settlements are and where Israel parks are," he said, referring to nature reserves where bolting is forbidden.

Eventually, the Wadi Climbing project established two places for itself, one in Ain Qiniya and one in Yabrud, which are in an area of the West Bank under Palestinian civil control and Israeli security control.

What motivated them to travel to the West Bank and set up the project was a glaring shortage of accessible leisure activities in the Palestinian territories. "We were shocked and saddened by the lack of recreational opportunities," Brown said. The two teach the course largely in English but with a smattering of Arabic that they learned in Jordan where they also spent some time climbing.

It was there they found that high costs had made rock-climbing a sport for a small segment of the rich. In the West Bank, they are hoping to broaden the sport's appeal.

With the backing of American, Palestinian and other private donors, they are seeking to make it accessible to all, charging only 60 shekels ($15) for a day's instruction – including shoe hire.

Rami Zughayer, 27, from East Jerusalem, said he heard about the project from his sister, who had done the course. "The first time she went, I thought it was just another stupid activity," he said. "Then I saw photos of her climbing a cliff 15 or 20 meters high and I told her: Next time, I'm coming too."
Last Update: Apr 20, 2015 11:41 pm
RELATED TOPICS