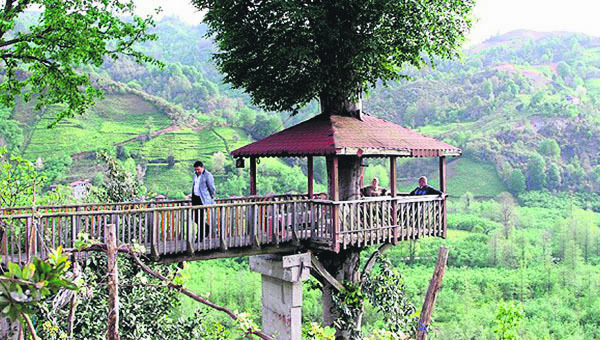 by Anadolu Agency May 04, 2015 12:00 am
Living in Rize's Çağlayan village, Mehmet Aydoğan built a horreo as he and his family could not find a place to swim during the summer. Aydoğan, 69, told an Anadolu Agency reporter that he wanted to spend time with his children and grandchildren after he retired, so he built a horreo above a huge rock across a stream with a kitchen. "We eat and drink our tea in the kitchen. The horreo also features a balcony where we can sit whenever we want." He said this horreo is open for anyone in the village to use and stressed that he hosts guests coming from abroad. "The visitors roll up their pants and cross the stream," Aydoğan said, adding that crossing the stream is a kind of thrill but he is considering building a drawbridge. Emphasizing that the sentimental value of the horreo is more important than its material value, he said he carried the necessary materials to build the structure from the forest on his back. Highlighting that many people come to the village just to see the horreo, Aydoğan continued, "The guests come here to drink tea and have picnics. The stream gives people peace." In order to have a better view of the Çağlayan Valley, Aydoğan also built a bower that is five meters high on a hornbeam tree outside his house as well as a 10-meter-long bridge between the bower and his house. He added that the hornbeam tree is the same age as himself. "I underwent two cardiac surgeries. This tree helped me get rid of the illness and get better," he concluded.
Last Update: May 04, 2015 11:49 pm
RELATED TOPICS