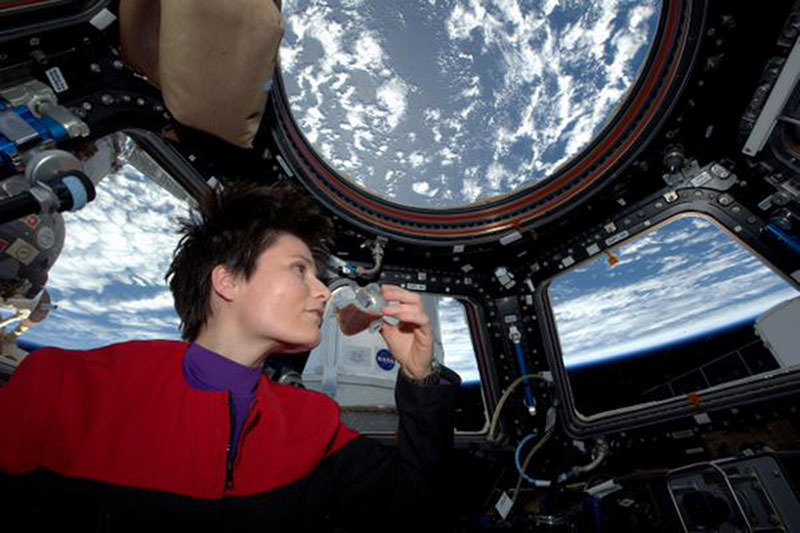 | Photo taken from Twitter
by Associated Press May 05, 2015 12:00 am
The first Italian woman in space is now the world's first orbiting barista.

Over the weekend, astronaut Samantha Cristoforetti fired up the first espresso machine in space. She posted a photo of herself on Twitter from the International Space Station on Sunday, sipping from a cup designed for use in zero-gravity.

For the special occasion, she put on her "Star Trek" uniform top.

"Fresh espresso in the new Zero-G cup! To boldly brew...," she added.

Cristoforetti, who returns to Earth next week following a half-year mission, almost didn't get any space espresso. The experimental, Italian-made espresso maker, dubbed ISSpresso using the International Space Station initials, was supposed to arrive in January, but didn't get to orbit until April because of a shipment backlog.

How did she like the space brew? She didn't say on Twitter, but she was all smiles for the cameras and gave a thumbs-up. It had to beat NASA's instant coffee, drunk by straw from a pouch. The espresso actually is brewed in a clear pouch, behind the closed door of the boxy coffee maker, and that's how Cristoforetti and NASA crewmate Scott Kelly first sampled it. Cristoforetti later switched to the small, pitcher-like zero-g cup, a new American-made item.

Italy's 120-year-old coffee maestro Lavazza and the Turin-based engineering firm Argotec, which teamed up on the space espresso project with the Italian Space Agency, were thrilled to see their 260-mile-high results.

The space espresso maker uses small capsules, or pods, of espresso coffee. Fifteen coffee capsules flew up with the machine aboard a SpaceX cargo carrier, as well as five capsules for flushing out the system. More coffee capsules are available for launch if requested by the six-person crew.