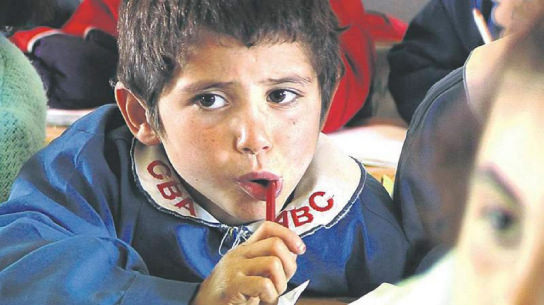 Spoken by the Zaza people in Turkey, the Zazaki language, which is listed as an endangered language by UNESCO, is attracting increased attention from students. Currently, 60 students are staying at the newly opened Department of Zazaki Language and Literature at Bingöl University, and 1,136 primary school students are taking the course as an elective

The interest shown in Zazaki language, spoken by Zaza people, has increased significantly by students after it was included on the list of "Living Languages and Dialects" as part of the initiatives regarding the Kurdish reconciliation process. In a 2009 UNESCO report, Zazaki was announced as one of the world's endangered languages.

Speaking to an Anadolu Agency correspondent, Murat Varol of Bingöl University's Department of Zazaki Language and Literature said more students are interested in Zazaki since it was introduced as an elective course at schools. He said there are currently 1,136 primary school students taking the course. Zazaki is also taught at certain universities. Following Turkish and Kurmanji (central Kurdish), Zazaki is the third-most spoken language in Turkey, Varol said. At Bingöl University, there are 60 students studying at the freshman and sophomore level in the Department of Zazaki Language and Literature. A total of 72 students are pursuing their postgraduate studies with and without theses in this field. Varol further added that 57 students have completed their postgraduate studies.

Tunceli University offers a bachelor's degree in Zazaki language. Additionally, related postgraduate departments or language courses are available at universities in Muş, Mardin and Diyarbakır. "Although the introduction of Zazaki is a positive step, there are still some shortcomings. There is not yet a common curriculum and a proper examination system to evaluate the development of students speaking the language. Another problem is the National Education Ministry does not assign a sufficient number of teachers who can speak the language, he said. For the last century, significant progress has been achieved in this field. The first academic study on Zazaki was conducted by Russian linguist Peter İvanovic Lerch in 1856. Varol stressed the oral tradition of Zazaki is so powerful. "In recent years, its written culture has also improved as well. The first written works in Zazaki emerged in the late 19th century," Varol said, adding the language also found a place in academic circles during the same period.

Varol emphasized Zazaki could not develop since eastern languages were introduced in written form later than Western languages, and there were many prohibitions in the early Republican era. However, he added that Zazaki managed to survive with its strong verbal culture until today.

He said the results of his research on Zazaki titled "A Bibliography on Written Documents in Zazaki Language," was published in Bingöl University's Living Languages Institute's magazine. "The first phases began with the European Union negotiations. During that period, the state-run Turkish Radio and Television Corporation (TRT) began 30-minute broadcasts every week," he said, adding that two Istanbul-based publishing houses then began publishing books in Zazaki and undergraduate and graduate departments began being established at universities.

"For the last three years, Zazaki has been taught as an elective course at the schools. All books in Zazaki belong date back last 30 years. During this period, 300 books have been written in Zazaki," he said. Varol highlighted that Zazaki still faces the risk of extinction despite the positive developments. "To save the Zazaki language from extinction and keep it alive, both the government and the people who speak that language should take responsibility," he concluded.
Last Update: May 06, 2015 9:12 pm
RELATED TOPICS