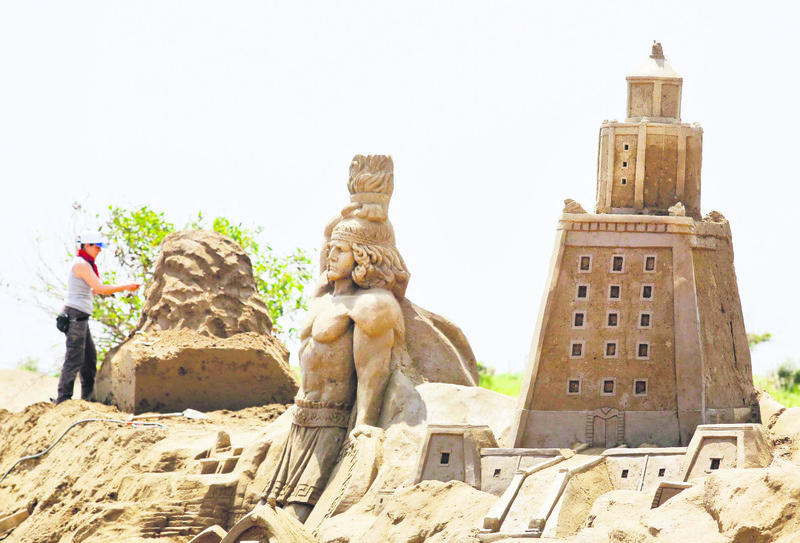 by Daily Sabah with AA May 10, 2015 12:00 am
Organized by the Global Design Art Works, the ninth edition of the International Antalya Sand Sculpture Festival (SANDLAND) will be held with the motto of "Seven Wonders of the World and Mythology" this year. Twenty-two sculptors from nine countries will work on 10-decare area on Antalya's blue flag Lara Beach and will make nearly 200 sculptures by using 15 tons of sand. In his statement to an Anadolu Agency correspondent, festival director Cem Karaca told that they aim to open their new exhibition venue to the public from Friday this week. Pointing out that the festival is one of the biggest sand sculpture events in the world, Karaca underlined a 5-ton increase in the amount of the sand compared to the last year.

Karaca reported that all sculptures will be made around this year's festival theme "mythology." "Visitors will be able to see and learn more about mythological figures such as Poseidon in Greek Mythology, and Ganesha in the Hindu Mythology as well as Seven Wonders of the World including the Egyptian Pyramids and the Hanging Gardens of Babylon," he stated. Karaca recalled the festival's intention to make the world's biggest sand sculpture and enter the Guinness Book of Records. However, the festival committee has to postpone the record attempt because of a last minute change in location. "Preparations should have kicked off months ago for such a huge sculpture. We did not have enough time for preparations due to moving. We had to postpone this record attempt to the upcoming year," Karaca said. The International Antalya Sand Sculpture Festival has been held since 2006 every year. In last year's edition, international artists worked on the "Empires" themes and made impressing sand sculptures of Nefertiti, Salahuddin al Ayyubi, Richard the Lionhearted, Catherine the Great, Süleyman the Magnificent and William Wallace of "Braveheart." The LED lighting system also offered a magnificent atmosphere at night and there were documentary screenings throughout the festival. So far, the festival welcomed artists from various countries including the U.S., Canada, Brazil, France, the Netherlands, the Czech Republic, Latvia, Lithuania, Russia, Ukraine, Portugal, Spain, England, Italy and Switzerland.
Last Update: May 10, 2015 10:56 pm
RELATED TOPICS