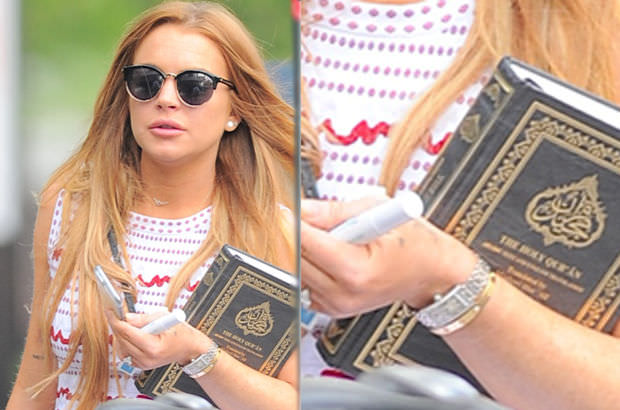 by Daily Sabah May 14, 2015 12:00 am
Troubled Hollywood star Lindsay Lohan, who has been under the spotlight due to her fast living and bad habits that she has struggled to shake off, was photographed carrying a copy of the Quran after the first day of her community service. Photographed in New York with an English translation of the Quran, it is rumored that the 28-year-old actress might convert to Islam.

Born and raised in a Catholic Christian family, Lohan has showed interest in other religions and spiritual movements before. She was a follower of the Kabbalah cult while she was climbing up the celebrity ladder. She was said to have joined Cortney Love's Buddhist chanting group in 2012. In her interview with Oprah Winfrey last year, she characterized herself as a spiritual person.

Living in London, the actress has abstained from alcohol and drugs. Early this year, Lohan shared verses from the Quran on her social media accounts but deleted them afterward.

She checked into a rehabilitation clinic after years of alcohol and drug use and was claimed to be undergoing a "spiritual detox" recently. "'I'm really in touch; whether it's prayer or meditation... there are so many powers greater than me in the world. I've been blessed and lucky enough to have been given a gift to share with others," she said.
Last Update: May 15, 2015 12:22 am
RELATED TOPICS