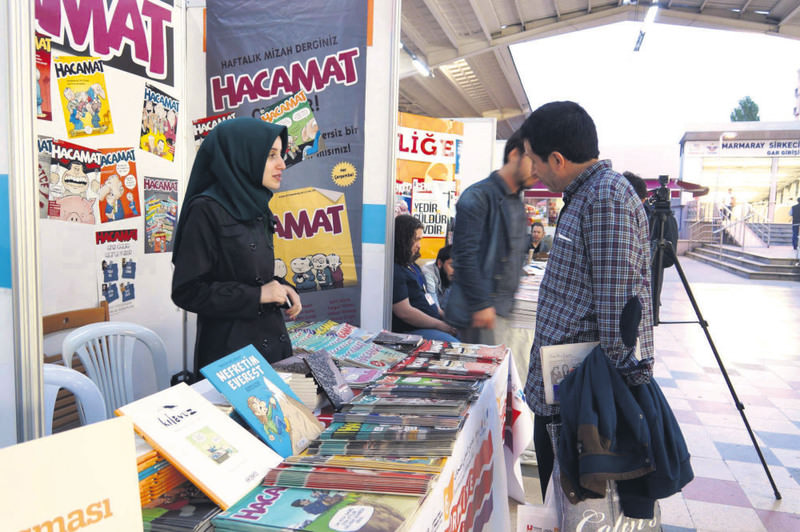 Beginning on Tuesday at the historic Istanbul Sirkeci Railroad Terminal, the sixth annual Turkey International Magazine Fair will run until May 17 with the theme of Resmi Tarihle Yüzleşmek (In the Face of Official History)

Organized by the Turkey Magazine Editors and Editor-in Chiefs Union (TÜRDEB), the sixth annual Turkey International Magazine Fair kicked off on Tuesday at the historic Istanbul Sirkeci Railroad Terminal. The opening ceremony was overseen by TÜRDEB board member Bilal Erdoğan. Erdoğan recalled his years at an İmam-Hatip High School, and said it was prestigious to write in literary magazines such as Seher, which they published at the school. During those years, they had a chance to express themselves through the medium of publications. He also said when he was in middle school, he was a team member of another magazine, Gülnihal. Erdoğan believes publishing and writing in magazines must be seen as a school of life for children and youth. He said publishing a magazine is different from writing an article or a poem. "Magazine publishing must be encouraged among the youth. It should be applied as education policy, as the publishing process contributes to people's lives," he continued.

TÜRDEB President Asım Gültekin said the fair is a big meeting for Turkish and international magazine publishers. The fair gathers almost 150 magazines, some of which are new and others that have a 30- or 40-year history.

Stressing that there is no such concept anywhere else around the world similar to the Magazine Fair, Gültekin said: "The hardest thing for magazine publishers is to write, draw and publish at the same time. For six days, we will meet other publishers, exchange new ideas and discuss many things. A person can follow a maximum of five magazines; however, Magazine Fair allows individuals gain familiarity with new magazines and their content."

Meanwhile, the president of Turkey's Professional Union of Press and Publishers, Alparslan Durmuş, said the fair, which began with moderate opportunities for publishers, has become a beautiful organization. He also highlighted that the fair hosts magazine publishers from 20 different countries.

Abed Hodja, the editor-in chief of the Palestinian children's magazine Samaha, expressed his happiness to attend the fair. "Turkey is a model for civilization. Muslims around the world closely follow Turkey. This country is also a cultural model for us. We will continue to follow them not only today, but in the future," Hodja said. The fair program features conferences, discussions, panels and music activities, and magazine authors and editors meet interested readers. Moreover, visitors of the exhibition "Dergicilerin Hata Defteri: Ah Şu Tashihler" (The Error Book of Magazine Professionals) are presented with a gift book. The fair will close with the award ceremony of the Bests in the Magazine World ceremony

Speaking to Daily Sabah, editor-in-chief of Lacivert Magazine, Meryem İlayda Atlas, underscored the importance of magazines in developing Turkey's intellectual heritage. "In Turkey, both rightist and leftist ideas center on the magazine tradition and community. So, we can say that magazines have been a stronghold for intellectual life. It has greatly contributed to the improvement of free speech and to the emergence of new ideas. Moreover, many well-known intellectuals built upon this tradition. Also, society's relationship with magazines has always been better than newspapers. From the past to the present, magazines have entered most houses and significantly affected public opinion.

She also drew attention to the importance of the place the fair has held, with regards to symbolizing people meeting in a historical atmosphere of the railway station. "The fair, held in the historic Sirkeci railroad station, is a place where history is tangible. It's better to meet with readers at street environment, instead of convening behind an indoor exhibition center," she concluded.

Faruk Günindi, editor-in-chief of Hacamat Magazine, told Daily Sabah the fair provides an important opportunity for readers and publishers to come together. "If you are publishing a magazine, you probably have a very busy schedule. And you may not have time to come together with other publishers. As a person working in this industry, I feel like a reader at this fair. I'm also happy to find an opportunity to have conversations with other publishers working in this sector. So, we can say that it's not just a writers and readers meeting, but also a place where you can exchange your ideas as writers," he said.

He underscored magazine writing is an important step for writers who want to go further. "Magazines are a kind of training area for writers who want to be professionals. For example, people who want to publish a book. It's some kind of channel where they can develop their ideas." He said the fair was a good start, as many people flocked to the event. "TURDEB's initiation is very important for further progress. Even though we don't have many financial resources, I think we succeeded in advertising the event. I'm sure future events will be even better," he concluded.
Last Update: May 14, 2015 11:51 pm
RELATED TOPICS