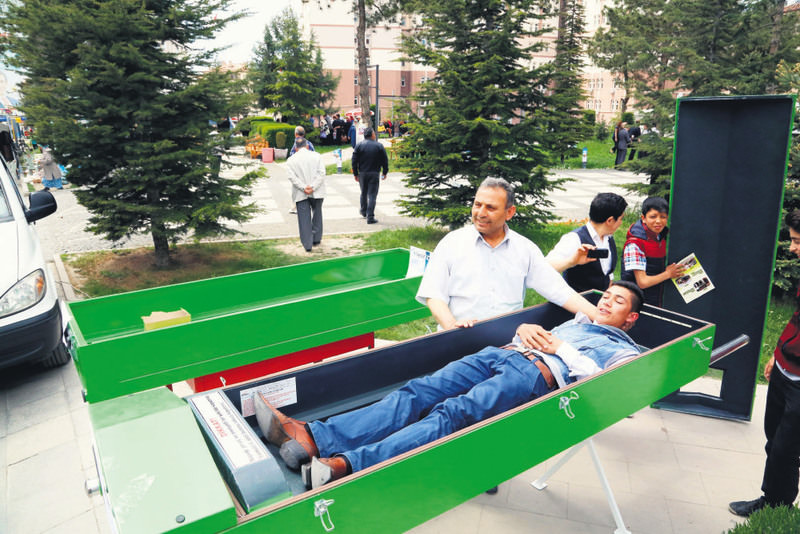 by Anadolu Agency May 15, 2015 12:00 am
As a part of the Ahilik Week events, organized by the Çorum Union Chamber of Merchants and Craftsmen (ÇESOB), merchants' and craftsmen's products are being introduced to the public. Among many products, an air-conditioned coffin has attracted the most attention.

Produced by a company operating in the Small Industrial Area, the air-conditioned coffin has caused a surprise. While some people examined the coffin in detail, some acquired information from the company managers about the features and the price of the coffin. Some people also took selfies with the coffin. Company executive Latif Erdem said they produced the coffin in order to preserve the dead person's body for a longer time, and added their product has been drawing intense attention. Erdem said they take orders from those who want to preserve the body at their houses for a while as well as villages that do not have morgues. The air-conditioned coffin is on sale for TL 3,250 ($1,255) compared to regular coffins that are sold for TL 1,250.

"This year, Ahilik Week celebrations are taking place on the busiest avenue of Çorum. We wanted to come here and promote our product. We offer regular and air-conditioned coffins," Erdem said. He added that people are surprised when they first see the coffins; however, they are relieved as soon as they learn the coffins are there solely to promote their product.

Gamze Karakaya, one of the people who examined the coffins, said she experienced different emotions when she first saw the coffins. "I was scared at first then I trembled before learning they are here only to be on display. Actually an air-conditioned coffin is a good idea. We do not have a morgue in our village. When a close relative of ours dies, it can be used. I like it. I want to be buried with a coffin like this when I am dead."

Another interested local, Anıl Uygun, got into the coffin to test whether the air-conditioning works or not. Uygun said they have air-conditioned coffins in her own village, and underscored, "I was wondering if the interior of the coffin is cold or not. It is a good project to preserve the body."