Elegance and history scrape the sky from Istanbul's mosques 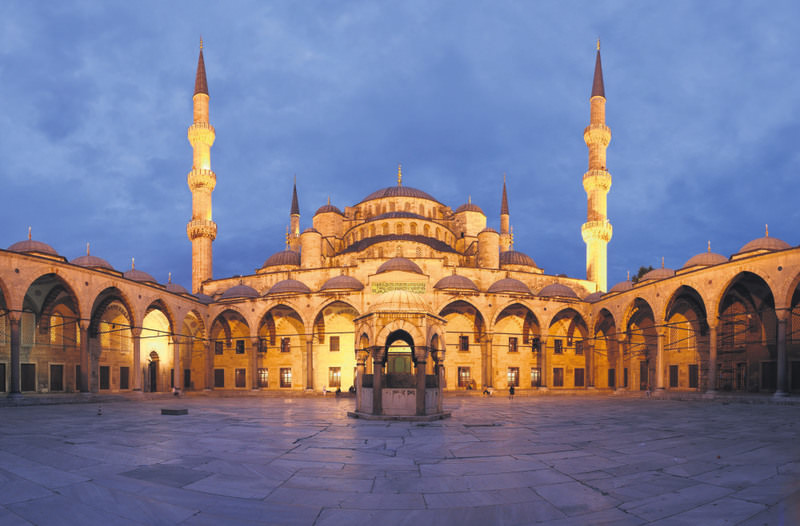 Istanbul's mosques, the main feature of Istanbul's skyline, are not only historical and representative of Ottoman culture, but are also the home of heart-warming stories

Istanbul, a magnificent city with many elegant landmarks, has many mosques that were mostly constructed during the Ottoman era. Some of the mosques are inseparable parts of the city's skyline. With Ottoman-style domed structures and minarets ascending to the sky, mosques in Istanbul are distinctive marks in the city. If you travel anywhere along the Bosporus you will see the charm and beauty of the mosques, especially when it is time to pray. Serving as a place of worship for centuries, each of these mosques has a spirit taken from those who have visited. Each of these mosques also has a story to tell. Known not only for their contribution to the skyline but also the messages they deliver five times a day make them special. In the early morning, late morning, midafternoon, evening and night, you will hear a call from the megaphones placed on the minarets of the mosques in Istanbul to call worshippers around the surrounding area to pray. The message given in the calls are all the same and simple. It is in perfect melody and touches the heart of those who hear with the help of the interpretative style added by each muezzin – the person appointed at a mosque to lead and recite the call to prayer. Among the mosques, the most famous are Sultanahmet (Blue Mosque), Ortaköy Mosque and Süleymaniye Mosque as well as the Hagia Sofia (Ayasofya), which has been a church then a mosque and is now a museum. For sure, they have many stories to tell visitors, but there are many others to visit considering there are more than 3,000 mosques in Istanbul. In this article, we will discuss some of the most distinguishing mosques around Istanbul that you must see and learn the story that lies behind their elegance.

Sultanahmet, also known as the Blue Mosque, called as such even though it is not as blue as you might expect, amazes its visitors not only with its magnificence, but also the surrounding area of the historical peninsula due to the many civilizations that have left their marks. The mosque was constructed during the rule of Ottoman Sultan Ahmed I exactly opposite the Hagia Sophia. According to claims, Ahmed I ordered the construction of the mosque to show the glory of Islam in the face of Christianity and asked the mosque's architect, Sedefkar Mehmet Ağa, to build a glorious mosque larger than the Hagia Sophia. But Ağa constructed the Blue Mosque only one hand span taller than the Hagia Sophia so as to not be disrespectful and demonstrate the Islamic value of modesty. Today, the Blue Mosque and its surrounding area are among the most visited places in Istanbul as many tourists visit to feel the energy dominating there. The mosque is open 24/7 to visitors, but there are some dress codes that you should respect while visiting just like other mosques. Women are required to wear headscarves when inside, and if you do not have a headscarf, you can borrow one for free from a booth next to the tourist entrance. You are required to take your shoes off while entering the mosque, and always stay quiet and respect those who are praying.

The Hagia Sophia – meaning divine wisdom in Greek – is a world landmark that draws many tourists' attention. Serving as a model for many other Turkish mosques, the Hagia Sophia, which was a church before it was turned into a mosque, but now serves as a museum, has a direct effect on its visitors with its charms and beauty. Built in the fifth century, it is approximately 1,200 years older than the Blue Mosque and stands as a model for wisdom with its age. According to claims, it is 1,100 years older than St. Paul's Cathedral in London and 700 years older than Westminster Abbey. The Hagia Sophia was constructed in only six years –impressive considering the technology and conditions of population of the time. Despite its age, the Hagia Sophia is not abandoned and ruined, but a fascinating gem with its huge imperial door that was used by Byzantine emperors, massive domed ceilings and metal lighting frames. Throughout its history, the Hagia Sophia was used as a Christian cathedral for 1,000 years, a Muslim mosque for 500 years after Mehmed the Conqueror took Constantinople from the Byzantine Empire and a public museum for 80 years. According to the story of how the Hagia Sophia was turned into a mosque from a cathedral, Mehmed the Conqueror changed the direction of the Hagia Sophia to face the Kaaba, a holy place in Islam where Muslims turn to pray. There is a legend that says Mehmed the Conqueror, leading the community behind him during the first prayers in the converted Hagia Sophia, said "Allahu akbar" (God is great) three times at the beginning, he then saw the silhouette of the Kaaba in front of him and the direction of the Hagia Sophia changed.

One of the best sights in Istanbul, the Süleymaniye Mosque, is the second-largest mosque and was built by famous Ottoman architect Mimar Sinan in the 16th century during Sultan Süleyman the Magnificent's reign. With its symbols of Ottoman architecture, the mosque was described as "semi-skilled work" by Sinan himself. The mosque is simple compared to the adornments of other Ottoman mosques. The tombs of Süleyman and his wife Hürrem Sultan are located in the mosque and the ceiling of the mosque's mausoleum is adorned with diamonds to create the effect of the stars that can be seen during a clear sky. There are many rumors about the Süleymaniye Mosque, which is exactly what makes this place so special. According to claims, Süleyman could not decide where he wanted his namesake mosque to be built. One night, he saw the Prophet Muhammad in a dream. Muhammad took him to the place where the mosque would be built and depicted all of its details to Süleyman. The next day, Süleyman called Mimar Sinan to talk about the mosque, but when Sinan came, he already knew the details of the mosque. With great curiosity, Süleyman asked: "How could you have known all the details that I would tell you?" Sinan replied: "I was standing right behind you when Muhammad told you about the mosque." It is also said there were four different, huge columns used in the construction of the mosque that came from different countries – one from the ruins of Baalbek in Lebanon, one from Alexandria, one from Redstone that was erected during the Byzantine Empire and one from Topkapı Palace.

Compared to the other mosques built in the name of the Ottoman dynasty, the Mihrimah Sultan Mosque is one of the most feminine looking mosques built by Mimar Sinan. Built between 1562 and 1567, the mosque was for Süleyman's daughter, Mihrimah Sultan, whose name comes from the Persian words meaning sun and moon. There is a religious training academy, a school, a hamam, shops and tombs within the mosque complex. Even though it was widely damaged by earthquakes in 1766 and 1894, it was mostly renovated and still protects its femininity. The story behind the Mihrimah Sultan Mosque is quiet interesting. It has been said that when Mihrimah Sultan turned 17, two men wanted to marry her, a provincial governor and Mimar Sinan. Sinan was in love with her even though he was in his 50s and married, so Mihrimah Sultan was married off to the provincial governor. Soon after, Sinan commissioned a mosque with her name in what is now Istanbul's Üsküdar district on the Asian side. He built a completely feminine-looking mosque that resembled a woman whose hair crept down her back. Later, Sinan built another mosque in honor of Mihrimah Sultan in the Edirnekapı district on Istanbul's European side. It also resembles a woman whose hair is draped across her back. What is even more interesting about these mosques is that on March 21, which is also believed to be Mihrimah Sultan's birthday, you can see that when the sun is setting behind the European side's mosque's minarets and the moon is coming out from behind the Asian side's mosque's minarets, just like her name.
Last Update: May 15, 2015 9:54 pm
RELATED TOPICS