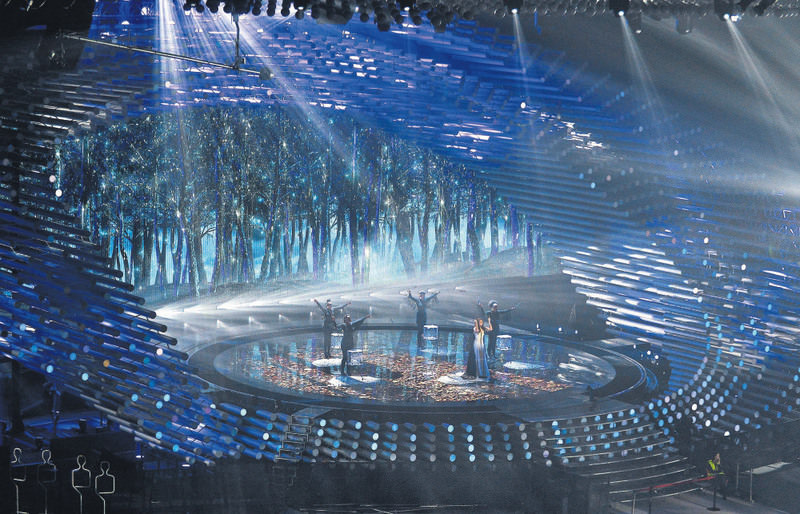 by May 18, 2015 12:00 am
On the surface, the Eurovision Song Contest, which begins on Tuesday in Vienna, is a competition among artists trying to woo European TV viewers with perfectly-crafted pop songs, glittering costumes and impressive stage effects. However, this year's contest comes as the world is entangled in crises and tensions, and several of the 40 acts from 40 countries are coming to the Austrian capital with songs about conflict, peace and social issues.

The most overtly political entry is by the Armenian group Genealogy. Its ballad, "Face the Shadow," includes the line, "Don't deny, don't ever deny," a possible reference to the displacement and massacre of Armenians 100 years ago in the Ottoman Empire.

Officially, the rules of the European Song Contest (ESC) are clear: "No lyrics, speeches [or] gestures of a political or similar nature shall be permitted during the ESC."

But politics tend to pop up at the annual event, especially around times of crises or when countries want to highlight their national identities, said Catherine Ba

ker, a historian at the University of Hull in Britain who has done research on the song contest.

After all, as contestants are fielded by national public broadcasters, who are linked to states and their national politics, she stressed to DPA: "It's built into the structure of Eurovision." In the two semi-finals on Tuesday and Thursday, and in the final on Saturday, the audience will hear several songs that do not have a direct political agenda, but that reflect on the conflicts that the world is facing. Hungarian singer Boggie will present her ballad "Wars for Nothing," while France's Lisa Angell will sing the line, "All that remains to me are ashes of my village plunged into silence." Russia's Polina Gagarina enters the competition with "A Million Voices," a highly emotional song about compassion and peace at a time when her country is facing diplomatic tensions over its role in the Ukraine conflict. But Gagarina is unfazed about possible negative audience reactions that may result from this political situation. She said in Vienna that she hoped the contest remained focused on music, and underscored that she was working with an international team. "Therefore, it is ridiculous to even consider a negative reaction," she said.Bookmakers agree: A few days before she was to appear in the first semi-final, Gagarina ranked fourth among the contestants on average among betting companies.Polish singer Monika Kuszynska was left partially paralyzed after a serious accident, and has said that she wants to help overcome the division between abled and disabled people. The Finnish punk band Pertti Kurikan Nimipaivat is composed of members with mental disabilities. Bass player Sami Helle confirmed in Vienna that the Finni

sh band was a statement against mainstream social norms. "We have the same problems like everyone else. We are four guys, we are humans," he said.
Last Update: May 18, 2015 10:58 pm
RELATED TOPICS