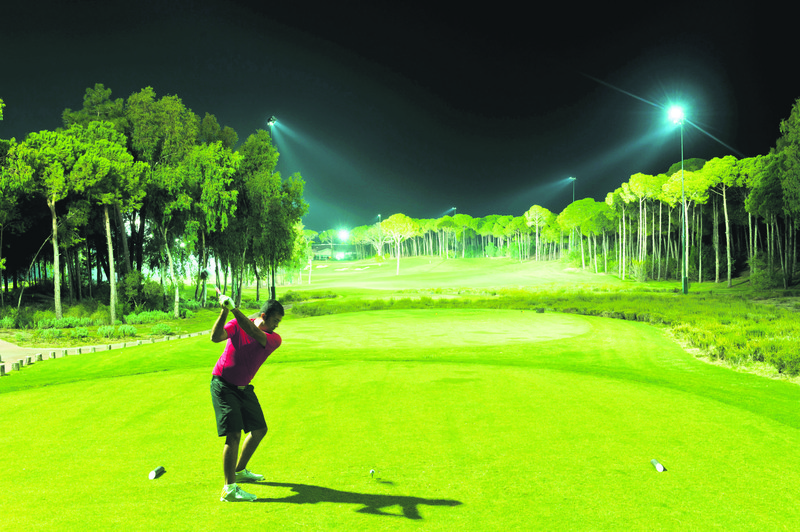 by Arda Sayıner May 22, 2015 12:00 am
This week, I attended the Ladies European Tour, a series of golf tournaments that began in Australia in February, which is now being held in Turkey. The Turkish Airlines Ladies Open took place from May 17-20 at Regnum Carya Golf Resort in Belek, Antalya - the pearl of Turkey. The tournament was organized in the one and only illuminated golf course in Europe and was really exciting as it easily engaged the attention of foreign golfers. A total of 126 professional female golfers from 32 countries competed in the tournament. On the first day, a tournament called Pro-Am, which brings the professional and amateur golfers together, was held. Foreign Minister Mevlüt Çavuşoğlu attended to the event and said in his opening speech that golf has a very promising future tourism in Turkey. He also said Turkey would be the hot spot for foreign investors, golfers and companies that do businesses in this sector.

Regnum Carya Golf Resort, where the tournament took place, is one of Antalya's new hotels. Even the furnishing in standard rooms has the quality of the superior rooms. Especially the changing sections and the Bulgari-branded products in the rooms make you feel like you are in more than just a standard room. Fikret Öztürk, the hotel's owner, is one of the organizers of the tournament. He is a real golf entrepreneur when you consider the investment he has made in the National Golf Club and the new golf courses he is planning to open in and around Antalya. He is a very brave and enthusiastic businessman who is also one of the most assertive people in the Turkish business world who exerts great time and effort for golf. Öztürk, who will create new horizons for golf tourism in Turkey together with his son, Ali Şafak Öztürk, said the 16 existing golf courses are not enough for the region, as there is potential for 50 golf courses in Turkey. I would like to compliment them for their vision and initiatives, which will contribute to Turkey's publicity to a great extent.

The person who has enabled the Ladies European Tour to take place in Turkey for the past seven years is a pioneer of the country's golf scene, Bülent Göktuna. By building the first couple of golf courses in Turkey during the reign of former President Turgut Özal, Göktuna became the honorary Turkish ambassador of golf. He is a true pioneer who toured Antalya by helicopter with Özal in the '80's to locate suitable locations to build golf courses. He is the living witness of the progress of golf in Turkey since that decade, and we should applaud Göktuna's energy and his efforts to promote Turkey via golf.

Thumbs up for the organization

In terms of the organization, it was unexpectedly elegant to have fully-dressed chefs stroll around the golf courses and serve traditional Turkish food. While the chefs successfully introduced Turkish delicacies, they also presented unique delicacies from world cuisine. It was also advantageous for the tournament to be organized in May when the weather was warm and pleasant.

During the tournament, Laura Davies - England's best female golfer who has won 80 tournaments around the world - also competed, as did many other famous international female golf players. During the cocktail party where such golf fans as Rahmi Koç and Sabri Yiğit were in attendance, I had a chance to converse with Erkan Akdemir, the CEO of Avea, the sponsor of Pro-Am tournament. As a board member of Turkish Golf Federation as well, Akdemir is a very good golfer. Akdemir emphasized they will support golf so youth will show more interest in golf, and said golf should be a more accessible sport. He added that it is very important to give weight to golf when publicizing the country abroad and to increase the number of golf courses so that Turkey can be regarded as a top-golfing country. I agree with him and compliment them for their support given to sports and the publicity of Turkey.

The golf club inside the hotel reminded me of the clubs in the U.S. The wooden architecture, the area used for live music accompanied by a piano and the large pro shop where golfing products are on sale help you connect to the place's golf culture. You can reach the golf club by shuttle from the hotel and have a bird's-eye view of the lush courses and villas of the hotel, which also have private swimming pools. The open buffet in the golf club is quite satisfactory. I especially loved the champagne risotto with mushrooms. I think the only problem with the hotel in terms of food and beverages is their cocktails. The young girls serving poolside cocktails while wearing roller skates was attractive and fast, but three different cocktails I tried were so different from the originals, unfortunately. Other than that, I had excellent time in the hotel. Thumbs up!

The awards ceremony recognizing the year's bests, sponsored for the fourth time by Fashion TV, was held at the Ataköy Hyatt Regency Hotel. The event was organized by Enis Onat, the representative of Fashion TV in Turkey, and Atilla Kaplakarslan, CEO of Vizyon Production. During the ceremony, numerous establishments and notable names from the sector were granted awards. The parties thrown by Fashion TV are also quite assertive. The channel organized the parties alongside a fashion parade every Friday during winter at the Billionaire Club in Istanbul. I am curious, though, where these parties will be hold in the summer. The biggest event of Fashion TV Turkey is the Fashion TV Beauty Contest, which will be organized in June at the venue of the primary sponsor, the Cyprus Rocks Hotel. Fashion TV Turkey also has the right to market the brand's concept hotels all around the world. Many features of the hotel, from the swimming pool to the pillows, are diamond-shaped like the logo of Fashion TV. As you know, fashion parties are frequently thrown in the brand's hotels and world-famous models attend the openings. The most successful of these parties is held at Fashion TV Bali Hotel. I would recommend you visit this hotel at the earliest or take a glance at it on the web. I congratulate Onat for promoting Fashion TV in such manner in Turkey.

Top 3 venues of the week

Top 3 hotels of the week

Top 3 restaurant of the week