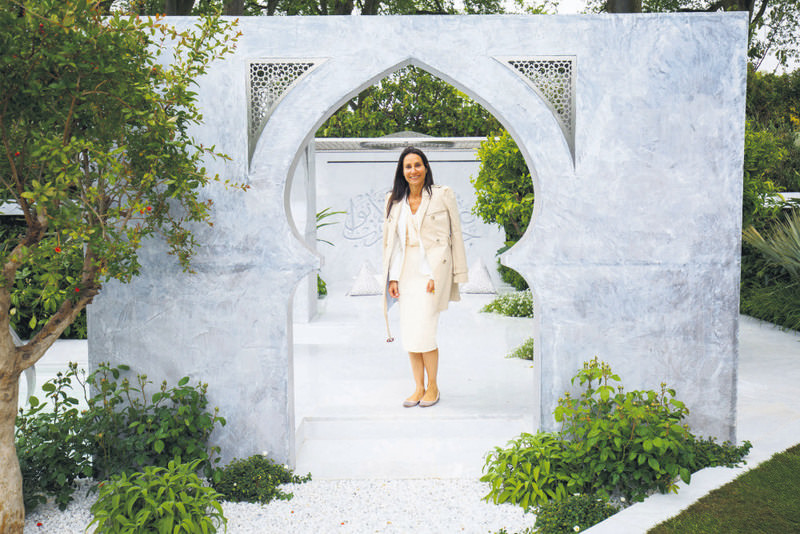 by Anadolu Agency May 22, 2015 12:00 am
Kamelia Bin Zaal, the first garden designer to attend the Chelsea Flower Show on behalf of the United Arab Emirates, held annually in the U.K's capital city London and visited by thousands of people, introduced her design named "The Beauty of Islam" garden yesterday. "I am so proud to be able to participate in the show. I designed this garden to shed a positive light on Islam and Arabic culture," Zaal said. She said that she dedicated the garden to Zayed bin Sultan Al Nahyan, the founder of the United Arab Emirates, who died in 2004, and said she was inspired by calligraphy and poetry and added a verse of the Quran.

Born in Dubai, Zaal studied garden design at the London Inchbald School of Design, and wrote on one of the walls of the garden a verse from Surat Sad which says, "Gardens of perpetual residence, whose doors will be opened to them." Zaal's garden features daisies, roses and rosemary as well as figs, pomegranates and olive trees.

Highlighting the importance of water in Islamic gardens, Zaal said water is important for watering the plants as well as "easing the soul" and "for calmness." She said that she received positive criticism of her garden, adding that many people showed their appreciation at seeing a different concept in the show.

Since 1913, the Chelsea Flower Show has been converting the large area on the west side of the Royal Hospital Chelsea into a huge botanical garden. Besides many flowers and plant species, garden tools and furniture are displayed during the show. The show, which runs for five days, also features one-of-a-kind landscape designs. Furthermore, the show offers music recitals for visitors as well as conferences on how to maintain a garden.
Last Update: May 22, 2015 11:51 pm
RELATED TOPICS