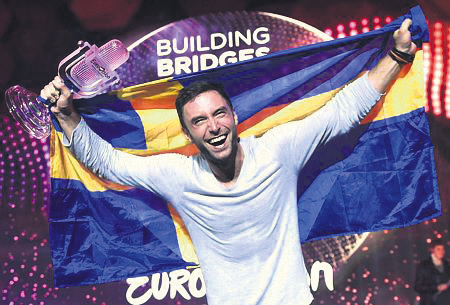 Mans Zelmerlow celebrates his victory at the Grand Final of the 60th annual Eurovision Song Contest.
by Compiled from Wire Services May 25, 2015 12:00 am

The victory in Europe's leading pop music competition makes him the sixth Swede to bring home the award. His predecessors include pop icons ABBA, who won in 1974, and 2012 winner Loreen.

"I couldn't be happier," Zelmerlow said. "It is unbelievable. I have dreamed of Eurovision all my life."

This year's Eurovision champion is no avant-garde musician. Compared to the previous Eurovision Song Contest winner Conchita Wurst of Austria and her bearded diva look, the new Swedish champion Mans Zelmerlow appears rather mainstream. But he seems to have found exactly the right balance between presenting himself as a serious artist and appealing to mass audiences.

However, there is more to Zelmerlow and his song than meets the eye, and the 10,000 people in the audience and the millions of television viewers witnessed an event that turned out to be more political than expected. "Congratulations Mans! A terrific performance," Swedish Prime Minister Stefan Lofven wrote on his Facebook. "Now you are Sweden's hero! Next year we welcome all of Europe. Celebrate well now and I'll call and congratulate you Monday."

Zelmerlow had gathered strong fan support over the last week's rehearsals and semi-final, with an uplifting, danceable song inspired by a boy who helped Zelmerlow at a time when he had few friends in childhood.

The singer made full use of the stage's technical capabilities. He interacted with hand-drawn animated schoolchildren on the backdrop, while a pulsating red heart was projected onto his chest.

An estimated 100 million people watched the 27 pop acts from as many countries fight for the title Saturday night, in addition to 10,000 who attended the 60th annual Eurovision Song Contest final in the Austrian capital.

Australia received a one-off chance to take part this year, in honor of the country's faithful Eurovision fan base. Australian R&B singer Guy Sebastian put on a strong show, ending the final in fifth place. "I've been fortunate enough to perform on various stages, but getting on that Eurovision stage, it's like nothing else I've ever done in my life," said Australia's contestant and former "Australian Idol" winner Guy Sebastian.

Poland's Monika Kuszynska was a combative contestant, refusing to let anything as trifling as her wheelchair – she was in a car crash in 2006 – get in the way of lifting Poland's first ever Eurovision title. "I consider my performance to be proof that it's possible to not get discouraged and to live life to the fullest even when it deals you a severe blow," the 35-year-old said

The Ukraine crisis and Russia's stance on gay rights upstaged the semi-final of the 2014 Eurovision, where Russia's entry was booed. This year, bookies' favorite Gagarina was hoping to woo Moscow's critics with her peace song "A Million Voices." "I am obviously a singer, an actress, a mother and probably a good girl," Gagarina said. "My song is about a million voices that speak the same language, the language of love."

Brits generally don't take Eurovision that seriously, but 18 years after Katrina and the Waves won Eurovision gold, Electro Velvet gave a strong performance with the catchy electro-swing song "Still in Love with You." "It's the 60th year, so it's a party year. And I think that we are bringing quite a party song and a party vibe," said Bianca Nicholas, one half of the duo with teacher and Mick Jagger impersonator Alex Larke.

Austria's pop-rock trio The Makemakes were unable to repeat the success of Wurst, as they didn't receive a single point, coming in last along with Germany's Ann Sophie.

Turkey withdrew from Eurovision after the 2012 contest, citing low ratings and dissatisfaction with the voting rules. The country also had strongly criticized the Eurovision's current "Big-5" rule, stipulating France, Germany, Britain, Italy and Spain are guaranteed a place in the final regardless of their performance the year before.
RELATED TOPICS