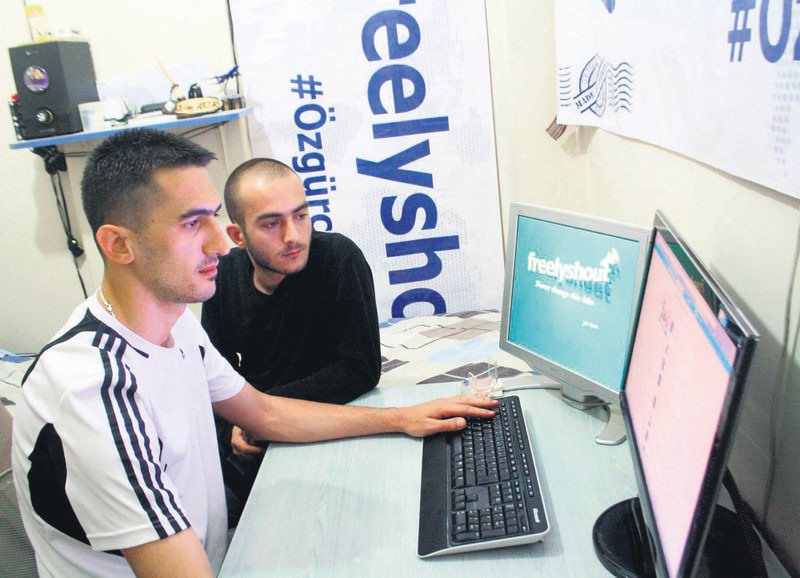 by Anadolu Agency May 26, 2015 12:00 am
Turkish entrepreneurs Ertan Aktaş and Yasin Ersoy, who created the local social networking site freelyshout.com two years ago, are unable to take financial support from the Scientific and Technological Research Council of Turkey (TÜBİTAK) because they do not meet the institution's condition of "holding a bachelor's degree in order to receive funding.

Living in the Gebze district of Kocaeli province in the northern, Ersoy and Aktaş, are primary school and high-school graduates, respectively. They established the site with TL 30,000 in 2013 and now indicate that they need approximately TL 200,000 ($11,400) in order to improve the software and launch the mobile application of the site.

The site provides users with similar features of the world's leading networking sites such as Twitter, Facebook and Foursquare all in one site. Freelyshout's features and software are designed in accordance with the requests of its Turkish users.

Users can also create their own blog on the site, where they can share photos and messages.

Aktaş, 30, explained the foundation phase of the site: "We talked about the idea of creating a local social network for the very first time in a small room, which was also my bedroom. We distributed the duties, I took the design part of the site and Yasin got the software task. The establishment of the site was started in 2011. For two years we worked on the beta version of the site. Finally, in 2013, we realized our dream and launched freelyshout.com."

Explaining that they made a presentation to Science, Industry and Technology Minister Fikri Işık, Aktaş complained about the requirement of being a university graduate in order to get financial support for scientific and technological projects from TÜBİTAK. "Freelyshout has 85,000 visitors and 22 million page views monthly. People are connecting to our site from 177 different countries. But we can increase this potential in the case of getting financial support from government agencies such as TÜBİTAK. They said that we should have bachelor's degrees to get support, but it doesn't make sense. Think about it, if Bill Gates had developed a project in Turkey, he wouldn't have received funding from the state because he is a high school graduate. We are waiting for the support of state officials, particularly from our president, Recep Tayyip Erdoğan," he said.
Last Update: May 26, 2015 11:53 pm
RELATED TOPICS