Paris to break hearts with removal of a million love locks 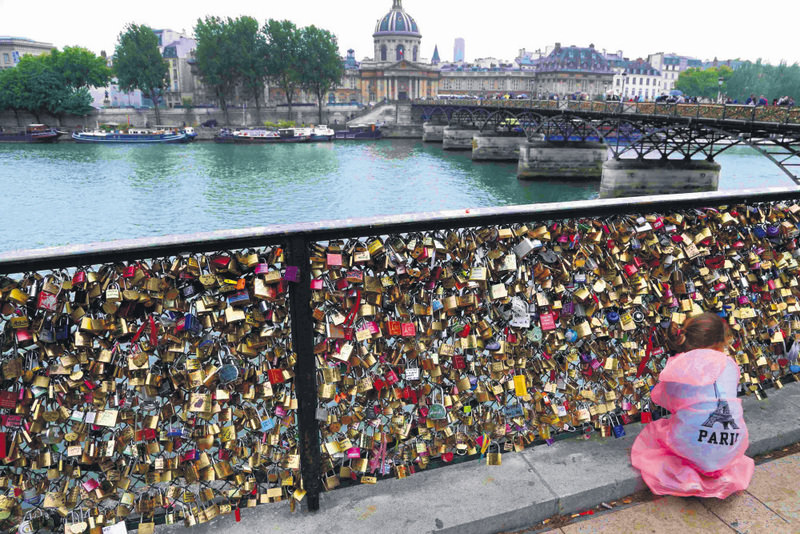 by Jun 02, 2015 12:00 am
Too much love can be a bad thing. Paris city officials, exasperated with lovers sealing their passion by clipping padlocks all over the city, are set to remove 45 tons of locks next week.

Starry-eyed tourists from all over the world flock to the Pont des Arts bridge spanning the Seine River to attach a lock, representing their eternal love, and throw the key into the river.

But the now-iconic bridge is buckling under the weight of such devotion, and authorities are desperate to stop the craze.

Last year police hurriedly ushered tourists off the Pont des Arts when a section of the footbridge collapsed under the weight of the locks covering the 155-meter-long bridge. Plastic panels were put up in places to deter lovebirds and authorities launched a drive to get tourists to upload selfies instead of attaching a lock.

But nothing stands in the way of true love, and tourists have kept piling the locks on the bridge and elsewhere.

The Pont de l'Archeveche bridge in front of the Notre Dame Cathedral is now as inundated with locks, while stray locks can often be spotted around the city. Deploring "destruction of heritage" and a security risk for tourists on the overloaded Pont des Arts, Paris officials have decided enough is enough and will remove all locks starting Monday. "We will remove nearly 1 million padlocks, or 45 ton," said city official Bruno Julliard, criticizing the "ugliness" of the locks on some of Paris's most beautiful bridges. The metal grills of the bridge will be replaced with works of art over the summer, and will later be replaced with clear panels. "We want Paris to remain the capital of love and romance," Julliard said, adding a campaign encouraging lovers to express their love in different ways, such as the selfie initiative, would get underway soon.

Jean, 57, a tourist from the south of France who was walking arm in arm with Marion, 42, his "mistress," said the city's plans were "stupid and a pity." "It is symbolic to seal your love by attaching a lock to this bridge, here in Paris, the city of love," he said.

Guillermo, 33, from Argentina, who was about to clamp his lock on the bridge to show his feelings for his new girlfriend he hopes to marry one day, suggested collecting all the locks "to make a sort of statue or monument."
RELATED TOPICS