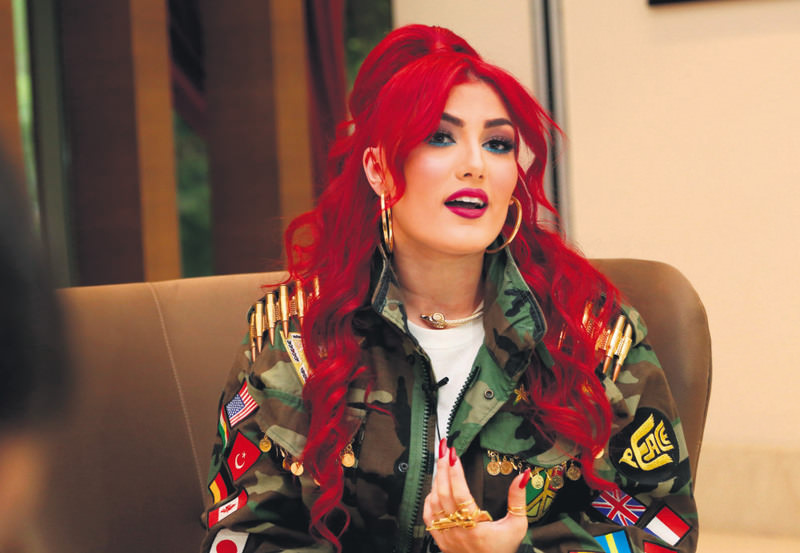 by Daily Sabah with AA Jun 08, 2015 12:00 am
Iraq-based Kurdish artist Helly Luv has been threatened by the Islamic State of Iraq and al-Sham (ISIS) and was included on the terrorists group's "kill list," however the brave artist said: "I respond to all terrorists who declared war to the Kurds and included me on their so-called kill list with my art."The 25-year-old singer, who lives in Los Angeles, previously caused a stir in the media due to the symbols she used in her music video "Risk it all," which was shot in Irbil. She was highly criticized due to her dance and the images of Molotov cocktails and entered ISIS's kill list after visiting peshmerga soldiers. Luv targeted ISIS in a second music video for her single "Revolution." She wore a peshmerga uniform and held a sign with the motto: "Stop the violence," sending a message to the terrorist organization. During the video, the flags of International Committee member countries such as Turkey, the U.S., U.K and Germany appear, asking for help from these countries to stop the ongoing war. Luv told Anadolu Agency (AA) that she wanted to give a message of peace by giving a place to different people from different religions and nationalities in her music video and said she is criticized as she uses different arguments and costumes in her videos.

The artist said that ISIS was attacking the Kurdish regions of Iraq while she was in Irbil to shoot the video, adding that she decided to make songs that will give courage to people instead of making love songs. Saying that she has attended many charity events, she continued: "We were able to raise a lot of money for people whose lives have been destroyed by ISIS. I did the same to the people of Kobani and other refugees. The most important objective is to make the voice of our people heard internationally. Music is the most effective weapon."

Luv, whose real name is Helan Abdullah, was born in eastern Urmia, Iran in 1988. Her family, which came from Dohuk, Iraq, had to leave Iran and lived in Turkey as refugees for a while before seeking asylum in Finland. She moved to Los Angeles and signed a contract with a well-known record company that worked with Rihanna and Michael Jackson. Currently, Luv is stirring up the music industry with her music videos for her singles "Risk It All" and "Revolution."
Last Update: Jun 08, 2015 1:23 am
RELATED TOPICS