South African veterinarians intervene to save Hope the rhino 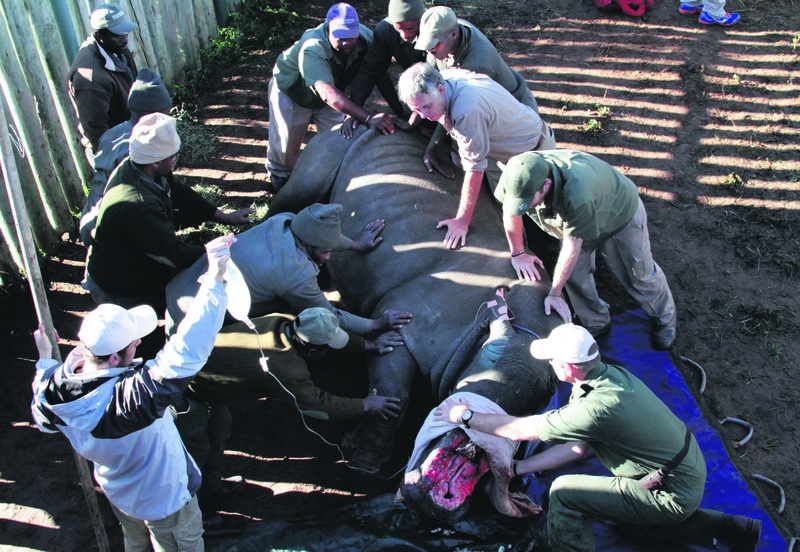 by Associated Press Jun 11, 2015 12:00 am
The horns and a large section of the rhino's face were hacked off by poachers, a horrific injury that exposed flesh and bone. One South African veterinarian treating the mutilated animal was so distressed by the suffering that he had to step away, his eyes glassy with tears. Then Dr. Johan Marais, an equine and wildlife surgeon at the University of Pretoria, rejoined the extraordinary effort to save the life of the 4-year-old rhino, now named Hope.

"You just can't believe that somebody from our own species can do that to an animal," Marais said of the gaping wound that exposed part of the rhino's skull and narrowly missed her eyes.

On Monday, a team of veterinarians cleaned and dressed the injury before securing a fiberglass shield on what remained of the rhino's face with wire stitches and steel screws drilled into the skull. An Associated Press team witnessed the operation on the sedated, 1.8-ton animal in a muddy enclosure on the edge of Shamwari Game Reserve, near the South African city of Port Elizabeth. Hope's caregivers seek to rally support for a story of survival amid the escalating poaching in South Africa, which harbors about 20,000 rhinos, roughly 90 percent of the world's population. 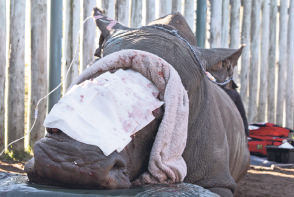 The South African government recorded more than 1,200 poached rhinos last year, reflecting growing demand in parts of Asia, where rhino horn is believed to have medicinal benefits. There is no scientific evidence to support that: The horn is made of keratin, a protein also found in human fingernails. The rhino being treated on Monday was darted by poachers, who severed her horns while she was sedated, fracturing her nasal bone and exposing the sinus cavities and nasal passage. The attack happened in Lombardini, a wildlife park where poachers recently killed several other rhinos.

Discovered alive days later, the rhino was given the name Hope by rescuers. She was moved to the nearby Shamwari reserve, where an initial surgery occurred on May 18.

She is "a voice for what the species is going through," said Dr. William Fowlds, a wildlife veterinarian who was the anesthesiologist on Monday.

The delicate task required monitoring the rhino's temperature and blood pressure and periodically administering drugs that briefly revived the animal, who groggily got to her feet as park staff swarmed around, steadying her immense bulk. A rhino can suffer potentially fatal muscle damage if it lies or sits too long in one position because its tremendous weight reduces blood flow.

Fowlds, Marais and another vet, Dr. Gerhard Steenkamp, belong to Saving the Survivors, a group that treats rhinos with gunshot wounds, facial gouges and other poaching injuries. The group has treated 10 injured rhinos in the last few years, nine of whom survived. Hope's wound, measuring 50 by 28 centimeters (20 by 11 inches), is among the worst the doctors have seen. Because there is little medical research on rhinos, the vets have been mapping bone structure and learning what painkillers, antibiotics and other drugs to use as they go along. Hope's treatment is expected to cost tens of thousands of dollars and last about a year and a half. She faces an estimated two dozen medical procedures, including periodic replacement of the facial shield, before the wound is fully healed.

Suzanne Boswell Rudham, a Saving the Survivors spokeswoman, said donations from overseas were increasing as Hope's story spreads. But the South African response has been lackluster, she added, citing possible "rhino fatigue" among people numbed by dire reports about African poaching, which sometimes include allegations of state corruption.

Police in neighboring Mozambique arrested 11 people, including police officers, who were suspected of illegally poaching 12 rhino horns, the Mozambique News Agency reported Monday. The horns were part of a massive seizure of 340 elephant tusks and 65 rhino horns in a raid in which two Chinese nationals were arrested, the agency said. South Africa is assessing whether the horns came from rhinos poached from its own parks.

Poachers who dart rhinos, a method that is stealthier than firearms and less likely to draw rangers' attention, have used a tranquilizer that only veterinarians can legally acquire, Fowlds said. He said that reflected corruption "either on the pharmaceutical side or through the veterinary supply chain." Thandi, a South African rhino whose horns were hacked off in 2012, recovered and gave birth in January after treatment, and veterinarians hope this rhino will do the same. "This is going to be a marathon," Steenkamp said of Hope's treatment. "We are being pushed by these poachers to push our boundaries."
RELATED TOPICS