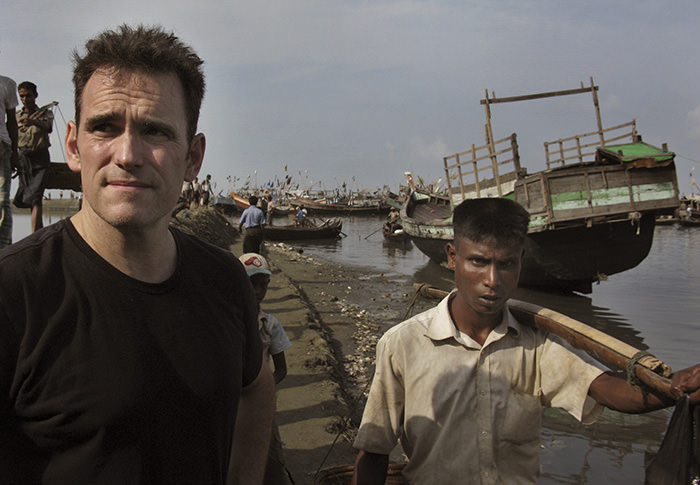 American actor Matt Dillon, left, stands with a Rohingiya man at Thay Chaung harbor, north of Sittwe in the western state of Rakhine, Myanmar (AP Photo)
by Anadolu Agency Jun 12, 2015 12:00 am
An Academy Award-nominated actor and screenwriter used his fame on Thursday to bring attention to Rohingya Muslims' "heartbreaking" conditions in camps in Myanmar.

"A lot of people are suffering," said Matt Dillon, who is one of the first celebrities to highlight the plight of the Rohingya, "It seems like nobody wants them. They're trapped. It's just not a way to live."

Dillon spoke at the National Press Club after returning to the U.S. after a visit to the camps at the request of Rohingya activist Thun Khin during an promotional tour in Asia for Dillon's new TV series Wayward Pines.

Dillon described the situation in the camps as "ethnic cleansing."

For years, Rohingya have lived under apartheid-like conditions and are denied basic rights, including freedom of travel, marriage, and access to education.

Rohingya Muslims fleeing persecution and violence in the Myanmar's western Rakhine state make up the majority of the thousands left stranded at sea in recent weeks, but the government has denied responsibility.

Last month, the bodies of more than 30 of migrants - most of them Rohingya Muslims - were discovered in southern Thailand, prompting a crackdown that led to smugglers fleeing. Boatloads of other migrants, as a result, turned up on Thai, Indonesian and Malaysian shores, while thousands more migrants remained at sea.

The Hollywood star complained that the government blocked NGO's from gaining access to the camps. "We haven't seen any aid workers in the camps, and it was a little strange," he said.

In such "miserable" conditions, Dillon said, life for those living in the camps is "very desperate," citing one woman who for months was stuck aboard a human trafficking boat with her children.

"She was beaten, her kids were barely fed, but she said she would try to escape again if she could," Dillon said.

Rohingya are stateless and unrecognized by the government "despite the fact that they have been born and raised there. They are been living there for many generations – longer than my descendants living in this country [U.S.]", he said.

Michael Gabaudan, president of the U.S.-based Refugees International said, "Matt Dillon's visit was important to give a profile to what's really happening there."

Gabaudan, who spoke on the panel along with Dillon, also slammed Myanmar's government for blocking NGO access to the camps. "They really need to beg the government for more access, and they tone down their criticism, in order to access Rohingyas," he said.

He also held Buddhist monks responsible for the violence against the Muslims. "There is a tremendous amount of hate speech promoted by the radical groups of monks. The government also promotes it," he said, adding that the authorities also use hate speech to create anti-Muslim hysteria in the country.

Myanmar does not recognize the term Rohingya and prefers instead to use "Bengali," suggesting the population is from Bangladesh across its western border.