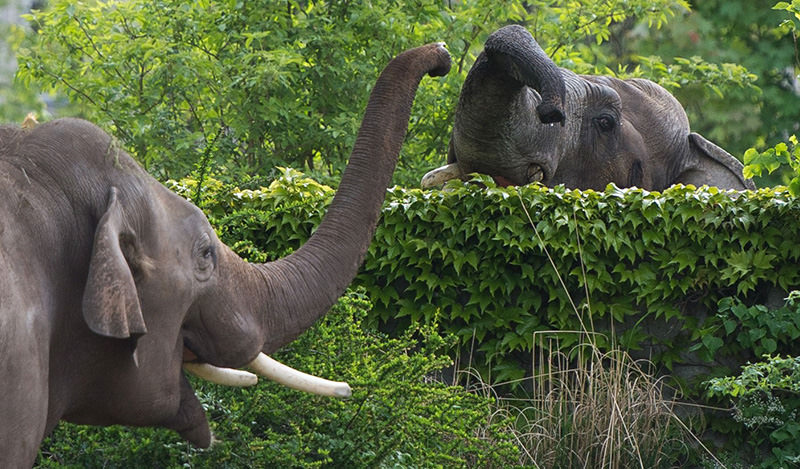 Elephant Voi Nam (L) is greeted by fellow Naing Thein at the zoo in Leipzig, eastern Germany, on May 8, 2015 (AFP Photo)
by Jun 14, 2015 12:00 am
A circus elephant in western Germany ran wild after escaping its tent and killed a man who was on an early morning walk Saturday, police said.

The 34-year-old female African elephant, whose name is Benjamin but is often called Baby, reportedly had a history of injuring people.

The 65-year-old victim was collecting bottles and cans in the woods near the town of Buchen at around 5:30 a.m. (0330 GMT) when the elephant attacked.

When he did not return from his walk at his usual time, the man's wife went looking for him. Near the circus tents she noticed several police cars, and when she got closer saw the body of her husband.

It remains unclear how the animal escaped the enclosure and what provoked the attack.

"The elephant cannot let itself out. So the question is: Did someone let it out or was the cage not properly locked?" a police spokesman said.

A nearby resident had observed the incident and called police.

A circus employee was later able to calm the elephant and return her to the tent.

The animal rights group PETA described the incident as a "foreseeable disaster." It said the elephant had seriously injured people in the past, including a woman in 2000 as well as a father and his 9-month-old son in 2010.

PETA, which opposes keeping animals in circuses, said that over the years it had petitioned the German Interior Ministry and Environment Ministry, along with local and state authorities, to have the elephant removed.

Police said they were looking into the past incidents.