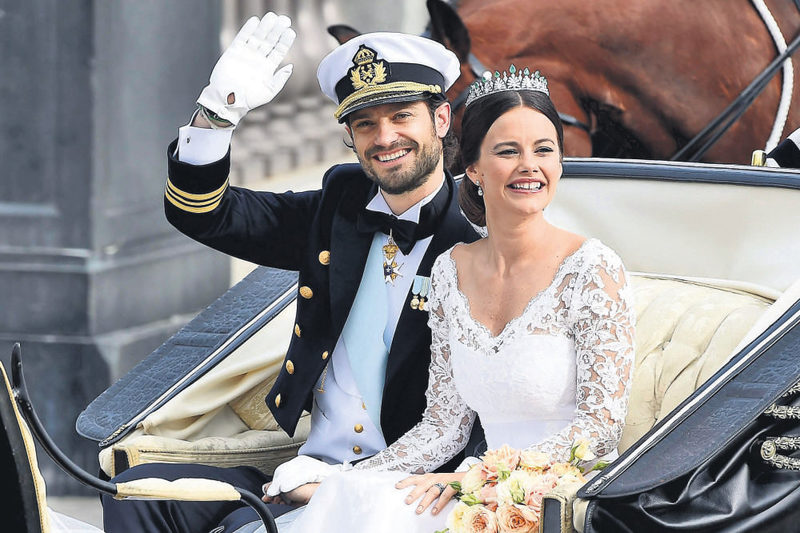 by Jun 14, 2015 12:00 am
Sweden's Prince Carl Philip married former model and reality TV star Sofia Hellqvist in the chapel of the royal palace in Stockholm on Saturday.

The 36-year-old prince, third in line to the throne, was visibly nervous during the ceremony, which was attended by royals from around the world including Princess Takamado of Japan, Queen Mathilde of Belgium and the Earl and Countess of Wessex from Britain. Hellqvist, 30, wore a dress by Swedish designer Ida Sjöstedt with lace sleeves and back which revealed the star-shaped tattoo between her shoulder blades. After a long wait at the altar, the prince struggled to put the wedding ring on the finger of his bride. Following the ceremony, the couple were greeted by thousands of well-wishers as they were driven in a horse-drawn carriage through central Stockholm before returning to the palace again for the wedding dinner and dance.

Addressing the crowd from in front of the palace in the early evening sunshine, the prince - a major in the Swedish navy and a part-time racing driver - thanked the public for their support.

"It shows Sweden is a warm country with lots of love," he said, before kissing Hellqvist to loud applause.

The wedding was a more low-key affair than that of the prince's elder sister and heir to the throne, Princess Victoria, who married Daniel Westling in 2010.

All of King Carl XVI Gustaf and Queen Silvia's three children have married so-called commoners, or those without a noble rank, with Princess Madeleine marrying banker Christopher O'Neill two years ago. Sweden is a constitutional monarchy and the king has no political power. Public support for the royal family has waned somewhat in recent years, but remains fairly broad.