Turkish shop a symbol in Berlin's war against gentrification 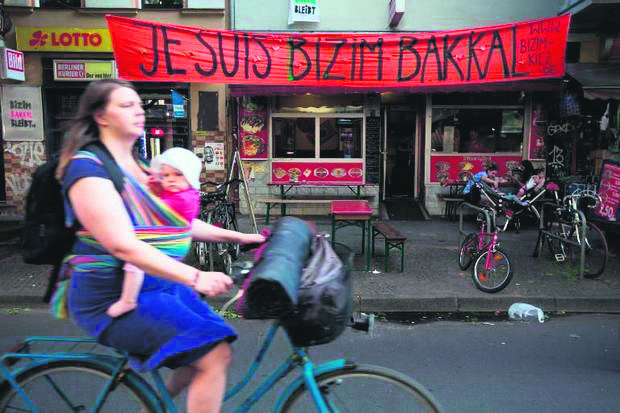 by Jun 17, 2015 12:00 am
After decades of quietly selling fruit and vegetables, a family-run Turkish grocery shop has become the unlikely flashpoint in a Berlin culture war pitting a neighborhood against property developers.

No one is more surprised than its owner, Ahmet Çalışkan, 55, who received an eviction notice in March, but has since been heartened by an outpouring of support from the people of his colorful, bohemian district of Kreuzberg.

Weekly rallies have made his shop a symbol in the battle against gentrification - the trend where fashionable low-cost city districts attract moneyed newcomers who drive up rents and prices, in turn forcing out low-income families, students and pensioners. Çalışkan 's humble "Bizim Bakkal" (Our Grocery) opened 28 years ago, in the days when the Cold War split Germany's biggest city in two and Kreuzberg was a gritty, working class district in the shadow of the Berlin Wall.

It has long been a center for Turkish migrants, earning it the nickname "Little Istanbul," as well as a hub for a colorful mix of students, artists and musicians who formed a burgeoning hippie and punk-rock scene. With its fashionable street cred, Kreuzberg changed from one of Berlin's poorest districts into a magnet for free-spirited partiers and tourists drawn by its mural-covered buildings, permissive club culture and cosmopolitan vibe.

Today, millions flock every year to the bars, techno clubs and shisha cafes of one of Berlin's trendiest areas, which hosts all-night dance parties and an annual Carnival of Cultures event, and, uniquely in Berlin, has directly elected a Green Party lawmaker to parliament. 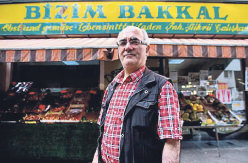 Since the Berlin Wall fell a quarter century ago, Kreuzberg has moved from the geographical margins of West Berlin to the center of a reunified city - another factor that has driven up both its popularity and its real-estate prices. Although Berlin rents and property costs are still far lower than in Paris and London, they have shot up recently, rising 46 percent across the city between 2009 and 2015, and by 54 percent in Kreuzberg during the same six years.

Çalışkan has witnessed the change since he came to Germany at age 14 to join his father, who had for years labored in German industry as part of the post-war guest worker program. The family opened the shop on the ground floor of a four-story building in Kreuzberg's Wrangelstrasse, selling an assortment of produce ranging from cucumbers and olives to goat cheese and kitchen herbs. Since then, the shop has sustained the family - now employing Çalışkan, his wife, Emine, 55, and their son Şükrü, 23 and as well as their 27-year-old daughter who studies biochemistry as well.

The eviction notice came in late March and ordered the business to vacate the premises by Sept. 30. "I am shocked," Çalışkan told Agence France-Presse (AFP), his eyes smiling but marked by dark rings of fatigue. "The lawyers say there is little chance of winning. I don't want to rely on social services, I want to earn my own money. But at 55 years old ..." Çalışkan said he tried to negotiate a new lease with the company, which plans to renovate the building and let out the apartments at higher rents. The company could not be reached for comment by AFP.

Berlin recently introduced caps for annual rent hikes, but this will not help the family because it does not apply to brand new or extensively renovated buildings. "People can't pay. This is an expulsion!" Şükrü growled, castigating the investors for being driven "by money and profit."

The investors' plans "will destroy their lives, but they don't care," sighed a local teacher who has taken up the family's cause against the forces of gentrification, which critics charge is changing the face of Berlin - a city that long prided itself on its mixed-income neighborhoods and egalitarian spirit.

The teacher, who asked not to be named in print, and many of the shop's other loyal customers have staged rallies outside for the past three Wednesdays, with people filling the pavement, sitting atop cars and sharing their message using megaphones, posters and stickers. Banners of support carry messages such as "Bizim Bakkal Must Stay" and "Je Suis Bizim Bakkal," borrowing the slogan from the solidarity campaign with the victims of the Paris jihadist attack on the satirical magazine Charlie Hebdo. The city's left-wing Tageszeitung daily likened the plan to close the neighborhood's oldest greengrocer to the loss of a cultural icon like a church tower, and said: "We would call that barbarism. And there's a lot we would do to stop it." For now, Çalışkan has not given up, predicting with a wry smile that "on Oct. 1, we will still be here."
Last Update: Jun 17, 2015 11:29 pm
RELATED TOPICS