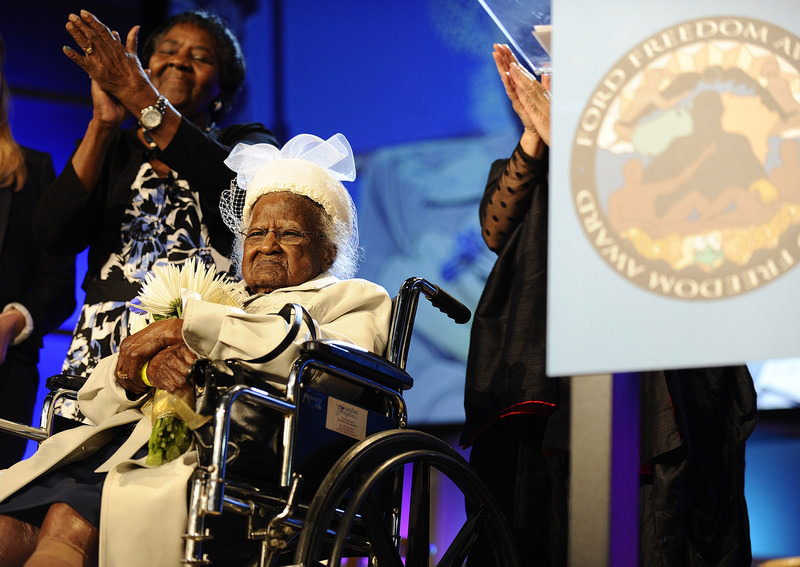 This photo taken May 5, 2015, shows Jeralean Talley, of Inkster, Mich., getting a round of applause after being introduced during the Ford Freedom Award Ceremony in Detroit. (AP Photo)
by Jun 19, 2015 12:00 am
Jeralean Talley, the woman who was deemed the world's oldest person, has died on Wednesday evening in Michigan right after her 116th birthday.

Born on May 23, 1899, Talley climbed to the top of a list kept by the Gerontology Research Group, which validates the ages of the world's longest-living people, after Gertrude Weaver died at 116 in Arkansas in April.

Talley died on Wednesday night in her home in Inkster, a Detroit suburb, which she shared with her daughter, Thelma Holloway, 77, said Christonna Campbell, a family spokeswoman.

"She was just a beautiful woman," Campbell said. "We enjoyed her words of wisdom."

Talley was born in Georgia and moved to Michigan in 1935 with her husband, Alfred Talley, for his job at a Ford plant. He died in 1988.

Robert Young, director of the Gerontology Research Group's Supercentenarian Research and Database Division, said Talley's death came as a surprise as she lived an active lifestyle.

"She was walking around as of a few weeks ago," Young said.

The next person who could possibly claim status as the oldest in the world is Susannah Mushatt Jones, who is 115, Young said. Born in Alabama, she is living at the Vandalia Senior Center in Brooklyn, New York, a representative for the center confirmed on Thursday.

Talley was an active member in the New Jerusalem Missionary Baptist Church in Inkster. Services for Talley will be held on June 27 at the church.