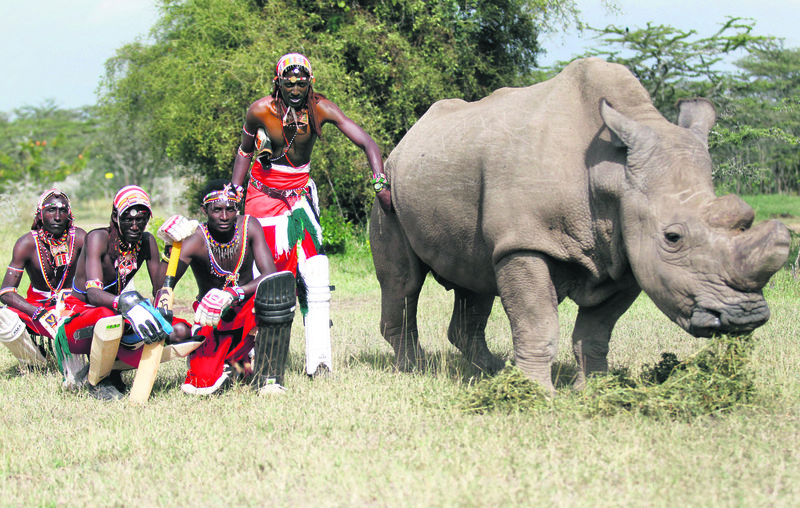 In a field deep inside the 90,000-hectare Ol Pejeta Conservancy in Kenya, the largest Black Rhino sanctuary in East Africa, stand 11 Maasai warriors.

They are feared by all neighboring tribes as they are known to be brave and fierce warriors. According to Maasai traditions, before a child can be circumcised into warriorhood, the young boy is required to make a daring journey into the wilderness where he is expected to stalk a lion and kill it. If one succeeds in the mission, he is celebrated and forever becomes a respected member of the Maasai community. The 11 Maasai men stand at the foot of the snowcapped Mount Kenya. Some of them have stretched earlobes and circular marks on their faces which were made by red hot iron rings while they were still young. Elephants, lions, buffaloes, hyenas, zebras and other wild animals can be seen in the distance roaming freely in the vast area that makes up Ol Pejeta Conservancy. The Maasai warriors are clad in red checkered sheets (shuka) with beaded ornaments, and they are smeared with red ochre, a natural earth pigment, revealing small cuts all over their bodies, which were made years ago to test how strong they are. The 11 Maasai warriors are not here to hunt wild animals as per their traditions. Rather, they stand in an open field playing cricket in order to save the endangered northern white rhinoceros.

The Maasai warriors' cricket team supports ending the traditional antipathy between wild animals and themselves. There are currently only five northern white rhinoceroses remaining in the world, with Kenya hosting the last remaining male rhinoceros, Sudan. Speaking to Anadolu Agency (AA), the captain of the Maasai cricket team - called Last Man Standing - said that the warriors had decided to replace traditional lion hunting with sports, adding that they now play cricket to save animals.

"We are here at Ol Pejeta Conservancy to raise awareness about the northern white rhinoceros," Sonyanga Ole Ngais told AA. "We are trying to tell people to pull out their resources, bring out their energy and ideas, and try to actually preserve the environment and some of the extinct animals. The Maasai are known to be pastoralists as well as being known for hunting lions and rhinoceroses. We are trying to change the culture and trying to make sure that everyone has that awareness of conservation. For us, as cricket warriors, we use cricket as a tool to spread these messages," he added. Ol Pejeta conservancy has a total population of more than 100 black rhinoceroses, 20 southern white rhinoceroses and three northern white rhinoceroses. Conservancy CEO Richard Vigne told AA that the Maasai are now conservationists of wildlife rather than persecutors of it. "They used to hunt lions as a show of manhood. Nowadays, they coexist well with wildlife and we have a lot to learn from how they managed to coexist with wildlife in the past," Vigne said. "I am very optimistic that eventually the human race will change the way that it manages this planet for us to be able to conserve all of the various wildlife species that we have on Earth. What is happening to the northern white rhinoceros is simply an example of what is happening to thousands of other species across the planet as we speak. So, we do have to change the way we consume, otherwise we are going to be left with a planet without any of these species," Vigne added.

Experts at the animal conservancy say that the quality of Sudan's sperm is poor because of his age. As for the two females with him, one is too old to mate and the other has problems with her reproductive organs. Scientists are looking at a variety of different techniques to try and save the species from extinction. They are currently working on in vitro fertilization. The plan is to create embryos from Sudan's sperm and the northern white females' eggs. The embryos can then be implanted into a southern white female rhinoceros as a surrogate mother to give birth to a purebred northern white calf. They are also looking at artificial insemination into southern white females to create a cross-breed calf. Experts at the conservancy are optimistic that one day science will bring back the species, which is currently on life support. Last year was a bad year for tourism in Kenya, with the latest government figures showing that the situation has been worsening as the tourism sector declined by a further 25 percent in 2015 due to insecurity. "What pays for the conservation of wildlife is for people to come and visit our national parks. We have some of the best national parks in the world," Vigne told AA. "We do have insecurity in some parts of Kenya, but not in every part of Kenya. When people do not come because they perceive Kenya to be unsafe, that affects our conservation efforts," Vigne added.

Even though the Maasai warriors lost the game to the British Army Training Unit in Kenya (BATUK), the team is optimistic that their calls to save the last northern white rhinoceroses will be answered.
Last Update: Jun 23, 2015 10:05 pm
RELATED TOPICS