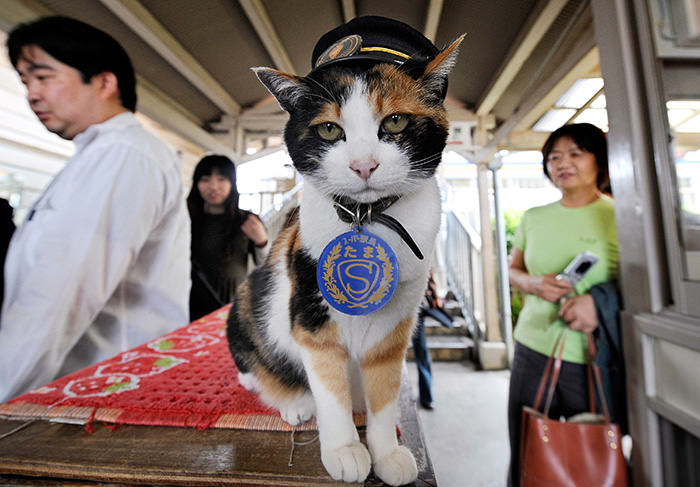 Photo from 2008 shows a female cat named ,Tama,, known as cat stationmaster of Wakayama Electric Railway, at Kishi station on the Kishigawa line in the city of Kinokawa, in Wakayama prefecture, western Japan (AFP Photo)
by Jun 25, 2015 12:00 am
A cat that served as nominal stationmaster on an obscure Japanese branch-line, bringing thousands of extra tourists and spawning a merchandising gold-rush has died, a railway spokesman said Thursday.

Tortoiseshell-coloured Tama is credited with single-pawedly saving the provincial Kishigawa Line after being appointed as master of the tiny Kishi station.

With the regional railway losing money, the station lost its last human employee in April 2006, passing on the mantle to Tama, who delighted in strolling around her own office wearing the formal uniform cap of Wakayama Electric Railway.

She proved a hit with visitors and word soon spread about the unusual animal arrangement, sparking a rush of media attention that brought fame -- and some fortune -- to the out-of-the-way place.

One study found that in 2007 alone, Tama's presence had boosted the number of people travelling on the Kishigawa Line by 55,000, injecting a purr-fectly respectable 1.1 billion yen ($9 million) to the local economy.

Wakayama Electric Railway spokeswoman Yoshiko Yamaki said the cat, which was 16, had been ill, but was feline frisky until the end, which came Monday.

"She had had a sinus infection since last month so was being cared for by her owner," she said.

"But when we visited her with the company president a day before (she died), she stood up and meowed as if she was begging him to hold her."

The governor of Wakayama, Yoshinobu Nisaka was among those who sent messages of condolence.

"Tama won a great popularity at home and abroad as a super star of tourism. At the news of her loss, I express my deep sorrow and great gratitude," he said.

The Asahi Shimbun reported that mourners were leaving flowers at the station.