To bike or not to bike, that is the question 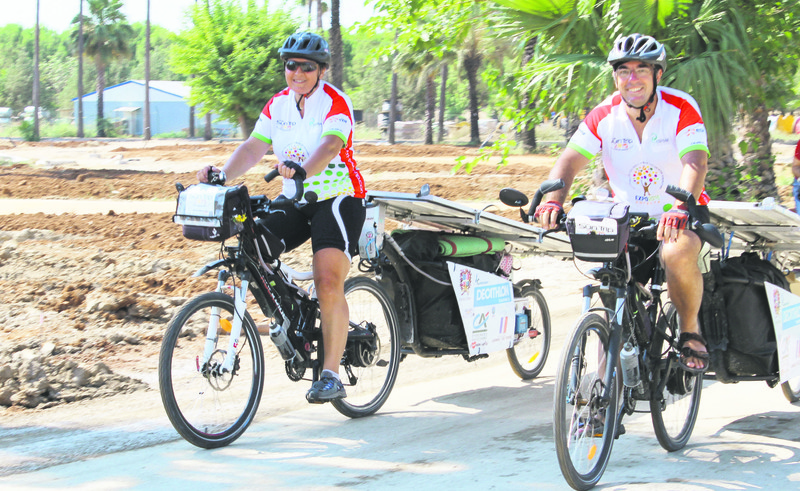 A mother of two, 50-year-old Beatrice Cazanave and her husband Yannick Aspe set off from Milan, Italy and rode to Antalya on solar-powered bicycles. Diagnosed and treated for breast cancer, Cazanave still set her cycling goals high and never stopped until she achieved them

Setting off from Milan, Italy, as a part of the Sun Trip race - where 25 cyclists from 14 different countries with solar energy-powered bicycles compete against each other - a French couple became the last contestants to arrive at the EXPO 2016 Exhibition Hall in Antalya. Beatrice Cazanave, 50, and her husband Yannick Aspe, 52, arrived in Antalya's Aksu district on their solar-powered bicycles and were welcomed to Turkey's southern province by Mucahit Şengül, assistant to the general secretary of EXPO 2016. Şengül spoke with the French couple as well as Thomas Pollet, another cyclist from the race who arrived in Antalya the previous day.

Cazanave, a data processing engineer who is the mother of two, said she and her husband set off from Italy and traveled for 3,500 kilometers. "Everything went very well," Cazanave said, stressing that their solar-powered bicycles exhibited great performance and everyone who saw their vehicle showed great interest. "We traveled through amazing scenery. Arriving to Antalya was a big moment for me and my husband, who is a teacher. The landscape of Antalya is truly beautiful; it is outstanding and peaceful. We saw a bear in Greece, which was also an unforgettable moment." 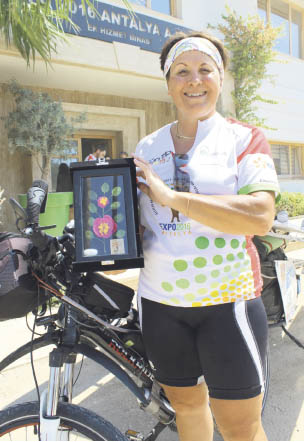 Cazanave said the families that hosted them as well as other people who they came across were very hospitable. She added that the Sun Trip experience was very emotional for both her and her husband. "I have been battling breast cancer for the last five years. I am under medical care; however, the cancerous tissue has spread to a large area. I received chemotherapy in the beginning and have been receiving hormonal therapy for the last five years," she said sharing her hardships. She noted that there are side effects of this treatment on her heart and emphasizing she is under the constant watch of her doctors. She said she has been feeling better since she became more active: "Exercise is a good way to beat this illness. It has a lot of positive effects both morally and in general." She said exercising keeps cancer patients' heart rhythm stable, especially in those whose illnesses affect their physical performance. "Exercising stabilizes the rhythm of my heart. I can cycle on tracks that I normally am unable to. My illness encouraged me to participate in the Sun Trip, as I suddenly felt like I want more from life," Cazanave said.

The French native added that she has to stay away from places with severe air pollution due to her illness and wanted to convey a message to all people who are suffering from cancer of any type: "Statistics do not always reflect the truth. Three years ago, I did not even think that I would be alive today. But, it has been five years and I am doing the exercise that I could not even do before. We celebrated my 50th birthday on the road. There is a life outside this illness." The French cyclist couple will leave for Milan after staying in Antalya for a couple of days.
Last Update: Jul 06, 2015 9:41 pm
RELATED TOPICS