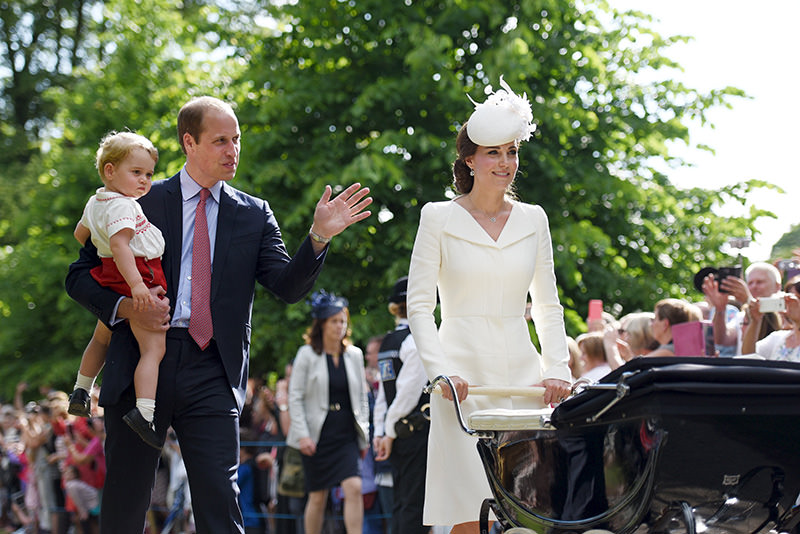 | Reuters Photo
by Daily Sabah with Agencies Jul 06, 2015 12:00 am
The newborn Cambridge Princess Charlotte has been christened in a ceremony on Queen Elizabeth II's country estate that was steeped in royal tradition.

Hundreds of fans outside St. Mary Magdalene Church in Sandringham, a sprawling royal estate near England's eastern coast, cheered as William and Kate arrived with toddler Prince George and 9-week-old Charlotte, who was in a vintage pram.

The Archbishop of Canterbury Justin Welby conducted the closed-door baptism of the nine-week-old princess.

It was only the second time Britain's newborn princess, who is fourth in line to the throne, has been seen in public since she was born on May 2.

Like her elder brother George, Charlotte was dressed for the occasion in a replica of the intricate lace-and-satin christening gown made for Queen Victoria's eldest daughter, also named Victoria, in 1841. Until 2008, that original gown had been worn by all royal babies including the queen at their christenings.

Ahead of the service, her parents Duke and Duchess of Cambridge chose five godparents for the christening among their cousins and close friends, including a niece of late Princess Diana.

The baptism service also marked the first time the Cambridges made a public appearance as a family of four.

Princess Charlotte Elizabeth Diana was born on May 2 at London's St Mary's Hospital where late Princess Diana gave birth to Prince William in 1982.

Her brother, the first child of Duchess Kate Middleton and Prince William who married on April 29, 2011 at London's Westminster Cathedral with a magnificent wedding ceremony, will turn two on July 22.
Last Update: Jul 06, 2015 12:55 pm
RELATED TOPICS