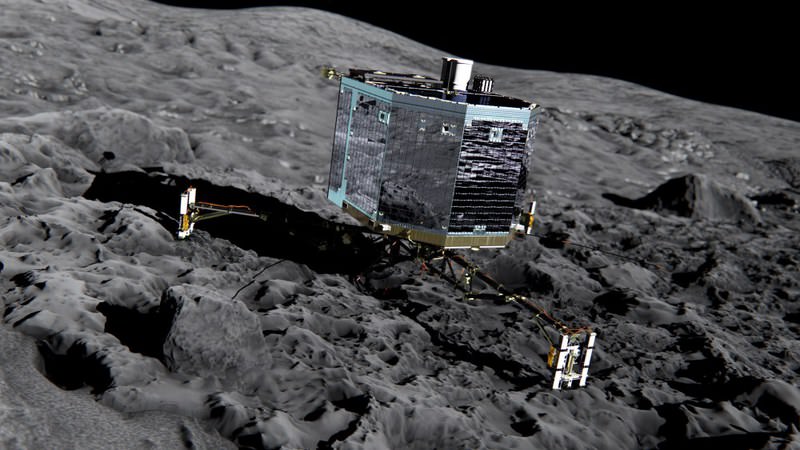 by Jul 07, 2015 12:00 am
Astronomers proposed a novel explanation Monday for the strange appearance of the comet carrying Europe's robot probe Philae through outer space: Alien microscopic life. Many of the frozen dust ball's features, which include a black crust over lakes of ice, flat-bottomed craters and mega-boulders scattered on the surface, were "consistent" with the presence of microbes, they said.

Observations by the European Space Agency's (ESA) Rosetta comet orbiter has shown that 67P/Churyumov-Gerasimenko "is not to be seen as a deep-frozen inactive body, but supports geological processes," Max Wallis of the University of Cardiff said in a statement issued by the Royal Astronomical Society (RAS).

In fact, the comet racing towards the Sun at a speed of 32.9 kilometers per second, "could be more hospitable to micro-life than our Arctic and Antarctic regions."

Wallis and his colleague Chandra Wickramasinghe of the Buckingham Centre for Astrobiology presented their theory Monday to a meeting of the RAS in Llandudno, Wales. They pointed to Rosetta's detection of complex organic material, which gave the comet its surprisingly super-dark and low-reflecting surface, as "evidence for life."

Furthermore, Wickramasinghe told AFP that 67P's gas ejections started "at distances from the Sun too far away to trigger surface sublimation."

This implied that micro-organisms under the comet's surface had been "building pockets of high pressure gases that crack overlying ice and vent organic particles," he said by email. Wickramasinghe also cited a rugged surface with evidence of re-sealed cracks, displaced boulders and a covering of organics that "need to be resupplied."

The observed features "are all consistent with a mixture of ice and organic material that consolidate under the Sun's warming during the comet's orbiting in space, when active micro-organisms can be supported," said the statement.
Last Update: Jul 07, 2015 9:57 pm
RELATED TOPICS