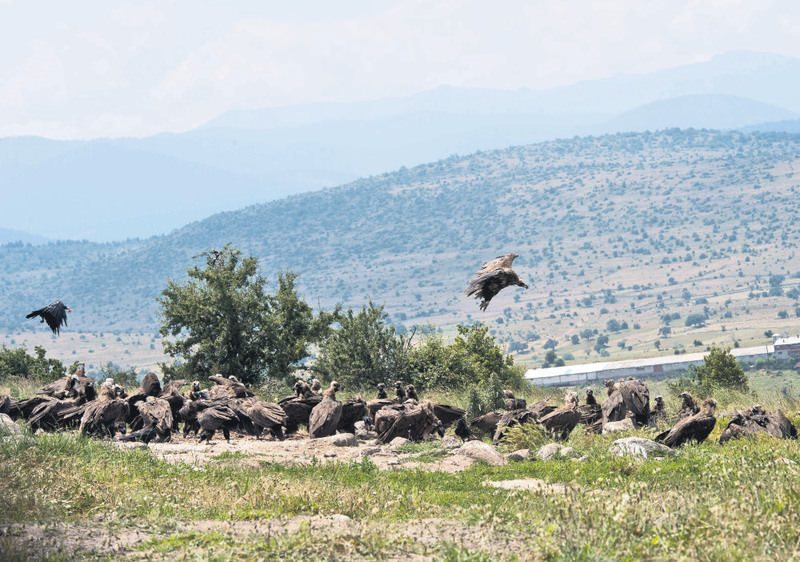 by Anadolu Agency Jul 13, 2015 12:00 am
At an animal feeding station called Akbaba Lokantası (Vulture Restaurant) in the Dörtdivan district of Bolu province, four different endangered species of vultures are fed, including black vultures. In a statement to Anadolu Agency (AA), Burak Doğansoysal, the coordinator of the Protecting Vultures in Dörtdivan project, said the project carried out in Sorkun village, which is 5 kilometers from the district, started with the discovery of some rare vulture species living around the district.

Doğansoysal said the Ornitofoto Bird and Wildlife Photographers Association decided to create a similar project. The project was realized with financial support from the United Nations Small Grants Program in 2012. He said they reviewed similar protection projects carried out in certain European countries such as Spain and Bulgaria.

Doğansoysal said the project's primary aim is to provide nutrition for the protection of four endangered vulture species. He said vultures generally died as they unconsciously hit high-voltage transmission lines while searching for food, mostly carrion, around residential areas.

"It is forbidden to leave carrion to nature within the scope of EU legislation. That is why these birds started to starve as they were unable to find carrion as much as they did before," he explained. He said another reason for the decrease in population was the loss of natural habitat. "These animals can only make nests in old pine trees with flat tops. This is the second reason for the rapid decrease in their numbers," Doğansoysal said. He said: "We tried to solve the first and easiest problem, providing nutrition. Now, we gather chickens that died in natural ways from chicken farms. It is easy to find dead chickens in this region and we feed vultures with them at the animal feeding station we established after we finalized the necessary procedures."

Doğansoysal said, "Vultures are the customers of the restaurant. At the station, black, griffon and Egyptian vultures are fed as well as bearded vultures, one of the most well-known vulture species in the world. It is possible to see the black vulture, which is a highly rare species in Spain and Greece. Apart from this, Turkey harbors the highest population of black vultures in Europe with approximately 600 pairs."

Adding that they built a special location next to the animal feeding station where rare vulture species can be seen, Doğansoysal said: "Annually, 250 photographers, observers and film crews come here to see these magnificent birds. We want to introduce the station to a wider audience. Also, we want to solve the accommodation problem in the district, complete necessary infrastructure for eco-tourism and properly host our visitors."
Last Update: Jul 13, 2015 9:46 pm
RELATED TOPICS