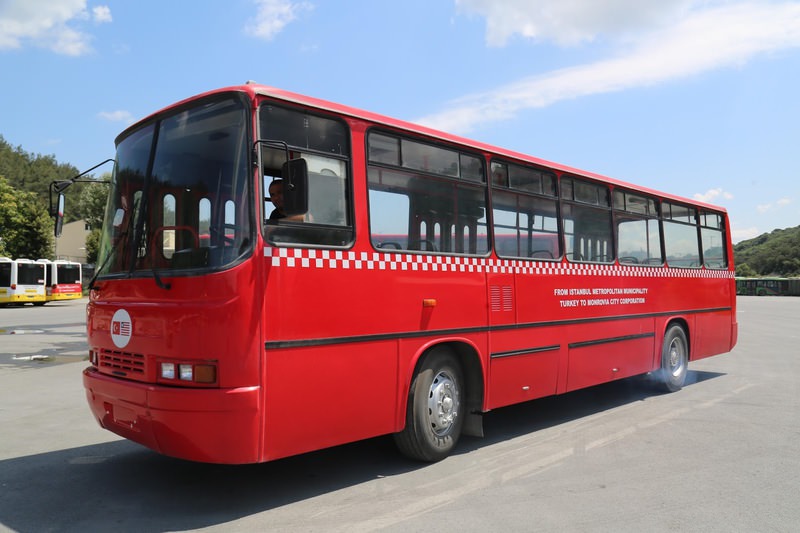 by Daily Sabah Jul 13, 2015 12:00 am
The Istanbul Electricity Tram and Tunnel (İETT), which recently renewed its bus fleet, continues to send its operating buses to countries in need. Following the 30 busses that were sent to Bosnia-Herzegovina, the İETT is sending buses to Liberia and Chad. The İETT approved Liberia's requests for buses and training, and signed a collaboration protocol with the Turkish Cooperation and Coordination Agency (TİKA) to grant the country 20 Ikarus buses. The busses were loaded onto ships on July 11 and are on their way to Liberia. All maintenance and repair work of the 20 busses was undertaken by the İETT, and spare parts were also shipped along with the busses. Moreover, two of the busses were converted into mobile hospitals in order to help Liberia with the recent Ebola outbreak.

During a meeting between Istanbul Metropolitan Municipality Mayor Kadir Topbaş with Chad's N'Djamena Governor Havva Came, the İETT is preparing to send 20 buses to the N'Djamena Municipality as well. The 20 Mercedes buses that will be shipped to Chad in collaboration with TİKA are currently undergoing maintenance and repair work. The buses are planned to be shipped to Chad in September. Six people came to Istanbul from Chad and Liberia to receive training on how to drive, repair and operate the buses. The teams, which will be trained by the İETT for two weeks, will also offer the same training in their own countries.
Last Update: Jul 13, 2015 10:05 pm
RELATED TOPICS