Srebrenica still an agony for humanity 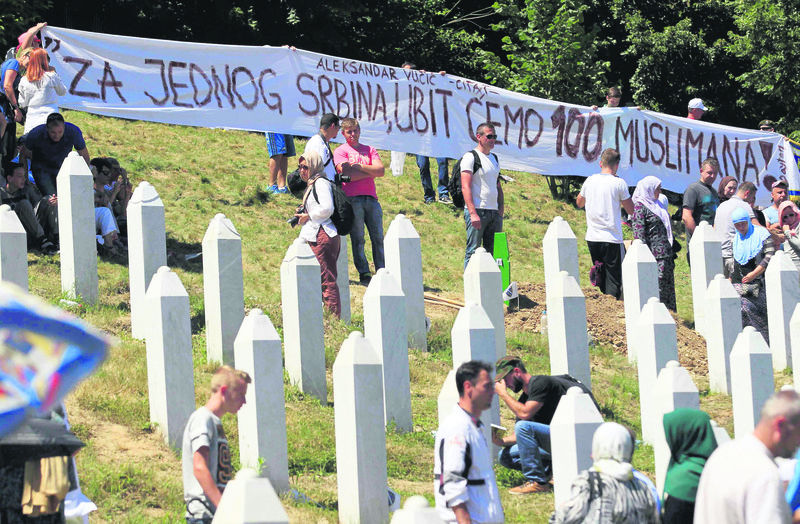 On the 20th year since the Srebrenica massacre, which resulted in thousands of deaths along with orphaned children and widows who faced inhuman treatment by Serbian soldiers, the Bosnian community is still grieving and trying to recover from the memories of war

Presidency of Religious Affairs Mehmet Görmez attended a ceremony marking the 20th anniversary of the Srebrenica massacre in Bosnia-Herzegovina and visited the grave of Alija Izetbegovic in the annual commemoration of the Bosnian war massacre. Describing the Srebrenica massacre as genocide, Görmez said: "The Srebrenica massacre was a heart-breaking massacre that one cannot stand. It was one of the biggest tragedies of the 20th century. Very important values were lost here, but it seems the necessary lessons have not been learnt although it has been 20 years. We supplicate God to prevent humanity from suffering such an agony again."

Emphasizing that one of the biggest mistakes of humanity is that it has started to discriminate among agonies, cruelties and evils, Görmez said: "Alija Izetbegovic put forth great efforts to protect the Muslim identities of the Bosnian people and help them maintain their existence without being slaves to anyone. We are here to commemorate the 20th anniversary of the Srebrenica massacre. It was a very difficult moment for us. Our Muslim religious scholars in Bosnia asked me to perform the prayer and it was very difficult for me to do."

Görmez said that it is a shame to have different points of views from the communities of those killed. He said that he felt sad because Pope Francis did not used the word genocide for the Srebrenica massacre in Bosnia, even though it is described as genocide by many international organizations and it went down in history as genocide. However, the pope referred to the 1915 incidents involving Armenians as genocide, although international organizations do not agree on it. "If a crime or genocide is carried out against humanity, no matter which religion, race or language, and human dignity is trampled on, our duty is to show the same reaction to all. I believe this will be understood better in the future and necessary explanations will be made," Görmez said.

He added that the Bosnian war was waged in the middle of Europe for a handful of Muslims to be allowed to protect their existence and identity. Görmez also said: "If you read the memoirs of British generals on the Gallipoli Campaign, you see the same issues there were also given by Serbians in the Bosnian war. That's why these two wars were similar to each other. May God rest the souls of all those killed in peace."

Görmez said: "The heaviest thing I saw after arriving in Srebrenica was that photographs of Russian President Vladimir Putin were hung since he vetoed [recognizing] this massacre [as genocide]. This indicated that some still haven't learned their lessons here. Because of this, I felt very sorry. This is the same in all world literature. The war in which the United Nations lost its reputation in front of all of humanity was the Bosnian war. People living in Srebrenica were under the auspices of the Netherlands and the United Nations. Yet, they were slaughtered and nothing was done. It is very upsetting that they still hesitate regarding this matter after 20 years, and try to cover it up with vetoes."
Last Update: Jul 14, 2015 9:48 pm
RELATED TOPICS